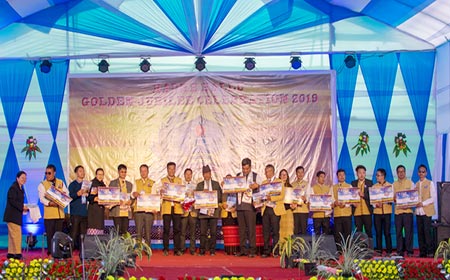 TAJANG, Dec 15: Stating that traditional clan-based organisations are nowadays “being strengthened by reorganising themselves into welfare committees,” Agriculture Minister Tage Taki said the Radhe Hallu clan “is an example of the success of such reorganisation.”
The minister said this during a function organised by the Radhe Hallu Welfare Committee (RHWC) here in Lower Subansiri district on Saturday.
The clan mostly inhabits Tajang, Reru and Kalung villages of the Ziro valley.
“One of the leading clans of Tajang village, Radhe Hallu has a bigger responsibility of promoting brotherhood and contributing to the progress and the welfare of the area,” Taki said, acknowledging the committee as “forerunners in established organisations.”
Besides undertaking other philanthropic activities, the RHWC sponsors students who qualify the preliminaries and the mains of various competitive exams, and the toppers of board exams.
In July this year, the committee donated waiting chairs to Gyati Takka general hospital in Ziro, and traffic signage to the police department.
Founding members of the committee and achievers of the clan were felicitated during Saturday’s function. The minister released a souvenir and a music album titled Radhe. The function was also marked by cultural presentations, games and sports, and Mrs Radhe contest.
Earlier, Taki inaugurated the RHWC’s office and the ‘foundation pillar’ of the committee.
Among others, SP Hemant Tiwari, ADC Nending Chatung, HoDs, and ex-panchayat members attended the programme. (DIPRO)