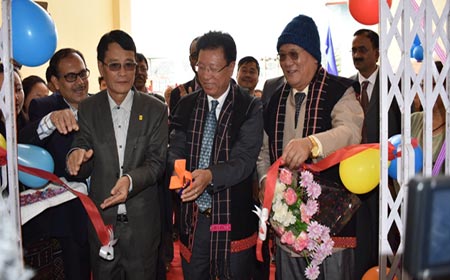 ITANAGAR, Dec 16: Cultural Affairs Minister Taba Tedir inaugurated the annexe building of Jawaharlal Nehru State Museum here on Monday. The annexe houses the ‘North-East galleries’.
Describing the day as “historic,” Tedir in his address said “this kind of ethnographic museum is the first ever in the Northeast. Through this museum, the bond of brotherhood among all the northeastern states will be promoted and create a positive impact on tourism and economic development of the state.”
The minister assured to provide all possible assistance in maintaining the museum.
Former research commissioner YD Thongchi, who was also present, urged the minister to open museums in the districts, and to “appoint trained museum personnel.”
He also emphasized the need to create awareness among the people about preserving the state’s cultural heritage.
Earlier, Research Director Batem Pertin briefed the minister regarding “the need of annexing the North-East galleries with JN State Museum, which is a premier and prominent institution in Northeast India.”
He said the museum would “accelerate homogeneity and integration among the people of the northeastern states.”
The museum’s Deputy Director, Dr SK Ghosh, apprised the minister of fund constraints and the shortage of technically trained museum personnel to provide improved services to visitors.
Tedir later released a souvenir marking the occasion.
Among others, State Gazetteer Director S Kri and Librarian Dr KK Pandey were present on the occasion.