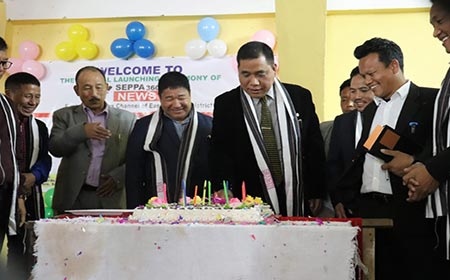 SEPPA, Dec 16: Seppa 360 News – the first digital channel of East Kameng district – was launched here on Monday.
Speaking on the occasion, MLA Tapuk Taku expressed hope that the channel would “always be the true voice of the people.”
“Journalists should be honest and courageous in gathering, reporting and interpreting information,” the MLA said.
Kameng Presidium School chairman Norbu Sonam highlighted the importance of the media and their role in the society.
Seppa 360’s News CEO, Tutu Dolo, said the news channel “will mirror the social issues of the district and boost the confidence of the common people.”
“Seppa 360 News, being the first digital news channel of the district, is committed to reach the un-reached section of the society by disseminating information to the common people without compromising with the truth of the story,” he said.