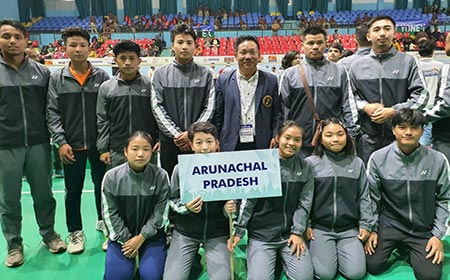 BHUBNESWAR, Dec 17: Over 600 budding shuttlers from 33 states and union territories will clash on-court in the Yonex Sunrise 33rd National Sub-Junior Badminton Championship, which commenced at the East Coast Indoor Stadium here in Odisha on Tuesday.
From Arunachal, 11 top-seeded players are participating in the championship, which consists of boys’ and girls’ singles and doubles and mixed doubles, informed Arunachal State Badminton Association secretary Bamang Tago.
The six-day event was inaugurated by Odisha Chief Secretary Asit Kumar Tripathy.
The Odisha State Badminton Association is hosting the championship for the first time with support from the state’s sports & youth services department.
Tago is among the BAI’s three executive committee members who have been nominated to monitor and oversee the conduct of the event.