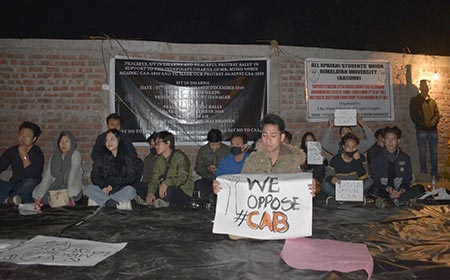 [ Tongam Rina ]
ITANAGAR, Dec 17: On Tuesday morning at 11, some five young people came together to protest against the Citizenship (Amendment) Act (CAA) at what remains of the IG Park tennis court here. By 8:20 pm, the number of volunteers had grown up to 100, and they decided to stage an overnight sit-in.
Amid short speeches, songs and slogans for freedom from the CAA, someone from the vicinity served them tea to beat the cold.

Dr Tamuk Yaja said that she decided to serve tea to the protestors after her brother’s friend informed her of the ongoing protest.
As she was rushing back home to make more tea, I caught up with her.
“The people of the state should come out. The people of Assam are doing all they can to save their land; we should do the same,” she said.
“People in Arunachal are indifferent and that should not be the case. The CAA will decide our future, so Arunachalees should come out and lodge our protest against it. The inner line permit (ILP) will not save us,” she said.
Agnes Linko, one of those who started the Itanagar protest, said she along with likeminded individuals started the protest because they were hurt by the discriminatory act which is a direct assault on the constitution, and by the attack on the students in Delhi.
“We are here for our rights. The power is in the hands of the young to set the right discourse. We are responsible for our future. We are not scared,” Agnes, who has a master’s degree in arts and aesthetics from JNU, said.
Speaking on the attacks on students in Delhi, she said, “If the state uses its power over the protesting students, getting into their libraries and attacking them with teargas, how are the students of the rest of the country to have faith in the government of this country?”
She said that online protests alone are not enough. “The protestors do not belong to any group,” she clarified.

Agnes and her friends joined Misso Nobin, a sociology student in RGU who is on an ‘indefinite progressive strike’ at Rono Hills.
Nobin, who spoke to this daily while preparing for his end-semester exam on Wednesday, said there has to be clarity from the government of Arunachal on the CAA vis-à-vis the refugees in the state.
“When there is assurance on the rights of the indigenous people, then I’ll think about ending the protest. Right now there is confusion,” he said.
The Bengal Eastern Frontier Regulation (BEFR) should be made into an act, he added.
“The government of India revoked Article 371 from Jammu and Kashmir. What is the guarantee that the BEFR, under which the ILP works, prohibiting people from other states from settling down in Arunachal, will not go?” he asked.
“If the government had done its homework, we would not have been sitting here in protest,” he said.
Nobin said that many, including teachers, have joined the protest against the CAA in the university campus. He appealed for a peaceful protest. “There is no solution in violence,” Nobin said. “We need solution, not violence.”
Bake Gumlam, a student of Delhi University, said she joined the Itanagar protest after she came to know about it through social media.
“The CAA is not right. It will affect the whole country. We are educated and we know what will be the future consequence. The government of India is using the excuse of ILP to silence us,” she said.