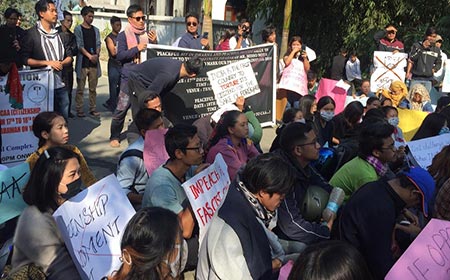 Staff Reporter
ITANAGAR, Dec 18: Hundreds of youths have joined the anti-Citizenship Amendment Act (CAA) peaceful protest march from Tennis Court to Raj Bhawan here on Wednesday. The peaceful protest march was organised by the likeminded youths of Arunachal, who spontaneously volunteered to organise protest march to oppose the discriminatory law and in solidarity with the people of Assam and Tripura.
‘Aazadi’ slogan reverberated as the protestors claimed the road leading to Raj Bhavan.
The protesting youths made it clear that they would not submit any memorandum to the Governor as their motive was to send a strong message to the Prime Minister and the Home Minister and the Supreme Court that the people of Arunachal are strongly opposed to CAA and that they stand with Assam and Tripura.
“Our motive is very clear to save the constitution of India. CAA is an attack on our generation, they cannot enact a law based on religion’, said Agnes Linko, one of the those leading the protest.
“We want to let the Supreme Court to know that we are sitting in front of the Raj Bhawan to oppose CAA” she added.
The agitating youth also strongly condemned the repressive policy of the BJP government in Centre by cracking down on peaceful protestors in Jamia, AMU, DU and Guahati University.
The peaceful protestors sat for hours near the Raj Bhawan entrance chanting slogans against CAA.
The protesters also demanded the state government to come out clear on exemption of the CAA under Inner Line Permit (ILP).
“ILP cannot protect us from illegal immigrants, if we research there are many non-APSTs holding land allotments. The government must make stringent ILP to protect our land, our people and our culture” said another protestor.
The agitating youth stated that their peaceful protest would continue till the revocation of Citizenship Amendment Act.