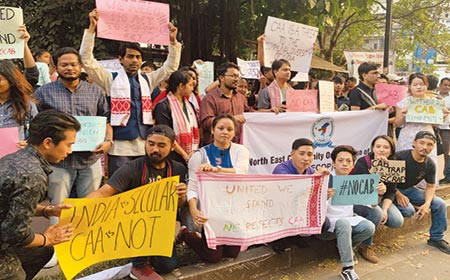 PUNE, Dec 21: Expressing solidarity with the people of the Northeast and their anti-Citizenship (Amendment) Act (CAA) movement, the North East Community Organization, Pune (NECOP) organised a peaceful rally from Jhansi Rani Laxmi Bai Chowk to the Deccan bus stop here in Maharashtra on 21 December.
The NECOP demanded that the central government immediately announce measures to conserve the linguistic and cultural identities of the people of the NE region and include the entire region under the 6th schedule of the constitution to provide legal and administrative protection to the indigenous people.
The organisation also demanded that the state governments bring back normalcy the Northeast and punish the “opportunist group(s) which have turned the protests a violent one.”