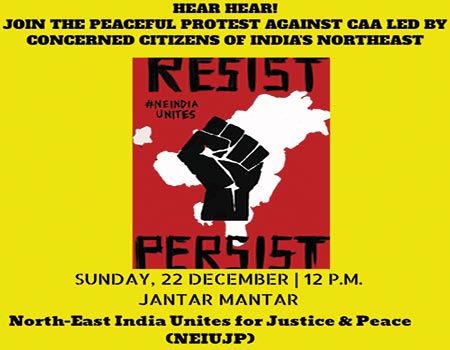 ITANAGAR, Dec 21: Members of civil society, under the banner of North-East India Unites for Justice & Peace (NEIUJP), are staging a peaceful protest in New Delhi on 22 December to register their rejection of the Citizenship (Amendment) Act (CAA) and demand unconditional release of Assam’s Krishak Mukti Sangram Samiti leader Akhil Gogoi, who has been arrested by the National Investigation Agency.
The solidarity demonstration will be held at Jantar Mantar in the national capital from 12 pm.
“India is facing a grave crisis at the moment. There has been a series of incidents which has left us anxious and insecure in our own country. The CAA disregards the rights of the indigenous people of Northeast India, and is a complete assault on the secular and plural fabric of this country,” the NEIUJP stated in a press release on Saturday.
It lamented that, despite the region having witnessed deaths, mass agitations and curfews, “our voices have not received the attention they deserve.”
“The country forgets that this region has been historically marginalized and continues to be misunderstood and misrepresented. Considering the long history of suffering and alienation that the region has endured, we, the concerned members of the civil society, have come together to raise our voices against the CAA,” the NEIUJP said.
The NEIUJP can be contacted in the following numbers: 9612182900, 9643922343, and 9002414499.