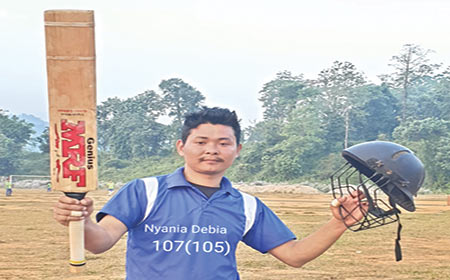 RONO HILLS, Dec 24: Nyanya Debia’s knock of 107 runs went in vain as his team, Parang, was defeated by Itanagar by 47 runs in a match of the Papum Pare District Cricket Tournament played here on Tuesday.
Debia’s 105-ball knock of 122 runs, studded with 13 fours and two sixes, was the first century of the tournament, Papum Pare District Cricket Association said in a release.
His opening partner, Techi Nania, contributed 16 runs. Tana Tater and Nabam Sania scored 30 and 13 runs, respectively.
The team was all out for 276 runs in 44.2 overs. The number of overs was reduced by five overs to 45 for ‘wasting time’ by Parang during their fielding, the release said.
Earlier, Itanagar set a victory target of 324 runs for Parang in 50 overs, with one wicket still in hand.
Opener Teli Abo scored 62 from 119 balls, (5×4), while Teli Talin slammed a quick-fire 50 off 29 balls, which included 5 fours and 4 sixes. Puda Tana contributed the highest 95 runs (12×4, 3×6) from 51 balls.