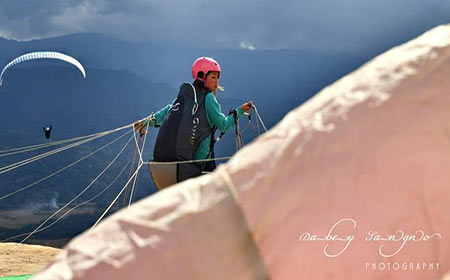 Paragliding to be made part of KRF

LUMDUNG, Dec 27: The Arunachal Pradesh Society for Education & Development (APSED), with support from the tourism department, organised a 10-day ‘basic-cum-refresher course’ in paragliding here in East Kameng district.
The course was conducted to promote adventure tourism, especially paragliding, in the Itanagar-Seppa and the Itanagar-Ziro tourist circuits, said APSED president Vijay Sonam.
“While the Itanagar-Seppa tourist circuit is the least visited tourist destination, there is no adventure tourism activities in the Itanagar-Ziro circuit, though it is a favourite destination of tourists,” Sonam, who is also the president of the Paragliding Association of Arunachal (PAA), said.
He said the paragliding sites in Yazali, in Lower Subansiri district, and Lumdung in Papu Valley of East Kameng, are being developed to promote adventure tourism.
Sonam said local youths and entrepreneurs can take up paragliding commercially. “Paragliding can generate employment for the youths,” he said.
He informed that five girls and six boys underwent the course here from 15 December, while seven boys and a girl have been sent to Bir Billing, in Himachal Pradesh, for undergoing advanced course to hone their flying skills.
East Kameng Social Welfare & Cultural Organization chairman Dahey Sangno commended Sonam and the PAA for putting Lumdung on the paragliding map.
“It is heartening to know that Arunachal, under his (Sonam) leadership, has the most number of female pilots in the country,” Sangno said.
He expressed hope that paragliding would promote tourism and generate employment opportunity for the youths of East Kameng.
“The EKSWCO is working hard to unearth the full potentials of East Kameng, and paragliding is one which has huge potential to make the district a hub of adventure tourism,” he said.
Sonam and Sangno agreed to make paragliding a major event of the Kameng River Festival (KRF), to be organised in February, 2020, coinciding with the Nyokum Yullo celebration.