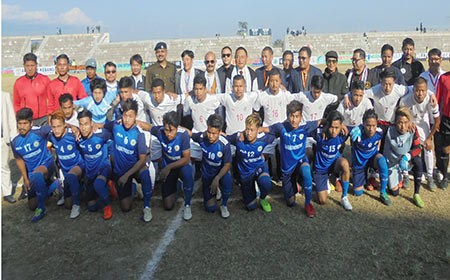 [ Prafulla Kaman ]
PASIGHAT, Dec 28: Hosts East Siang started their 18th Tadar Tang State Level Football Tournament campaign on a winning note with a 2-1 win over Lower Subansiri in the inaugural match played at the main stadium here in East Siang district on Saturday.
After a goalless first half, East Siang broke the deadlock in the second half when Dibong Kayin Mengu scored in the 43rd minute. Kamin Darin netted the second goal for the hosts five minutes later (2-0).
The consolation goal for Lower Subansiri was scored by Tane Gumte in the 63rd minute.
In another match played on the day, Capital Complex beat Siang 3-0. Rigio Tapu scored a brace in the first half, while Tage Tashi netted the third goal in the second half.
MLAs Ninong Ering and Kaling Moyong attended the inaugural ceremony. Both the MLAs advised the players to play the game with sportsman spirit and in a friendly manner.
Fourteen teams are participating in the tournament. The final will be played on 5 January.