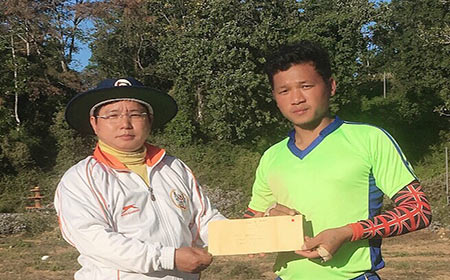 RONO HILLS, Dec 30: Itanagar is one win away from reaching the final after they beat Naharlagun by 33 runs in the first semifinal of the Papum Pare District Cricket Tournament played here on Monday.
Balijan is another semifinalist. The semifinalists will compete with each other, and the top two teams will play in the final.
Opting to bat first, Itanagar posted 206 runs in 38.4 overs, losing all wickets.
Techi Tiklee was the top scorer for Itanagar, scoring 60 runs off 86 balls. His knock included seven fours and two sixes. Later, Tiklee was adjudged the man of the match.
Tana Tallum took three wickets, conceding 56 runs.
Naharlagun failed to chase the 207-run target, and were bundled out for 172 runs in 32.4 overs.
Khoda Baking made the highest 66 runs off 57 balls (4×10, 6×2).