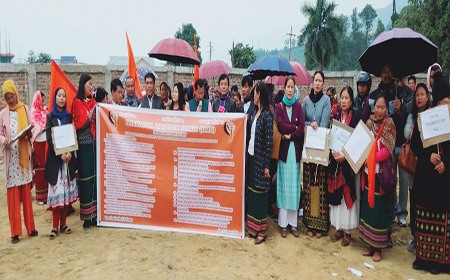 Staff Reporter
ITANAGAR, Jan 3: The state unit of the Bharatiya Mazdoor Sangh (BMS) on Friday joined the nationwide protest to highlight issues concerning the working class.
Speaking to reporters at IG Park, where the protest was held, state BMS president Yasi Sonam said the BMS along with seven other workers’ organisa-tions joined the protest “to place their demands before the central government.”
The BMS unit has prepared a 21-point memorandum, which it submitted to the prime minister through the capital complex deputy commissioner after the rally.
In its memorandum the state BMS urged the Centre to increase the payment under the Bonus Act, 1965. Its other demands include increasing the maternity benefits, providing gratuity coverage, and disbursing honorariums for anganwadi workers, incentives for ASHAs and honorariums for rural postal employees “according to the Kamlesh Chandra report.”
It also urged the PM to include the unorganised workers under the Ayushman Bharat scheme, and to ratify the International Labour Organisa-tion’s Convention 182.
The unit also demanded that anganwadi workers, ASHAs, MDM workers, rural postal workers and “other scheme workers” be declared government employees.
Sonam said the state BMS will await instructions from its apex body on the step to be taken following the submission of the memorandum.