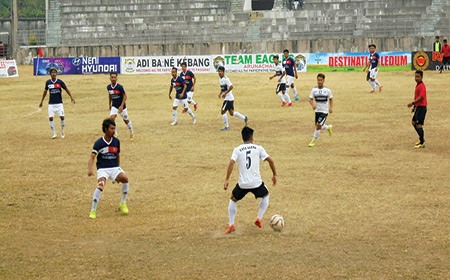 [ Prafulla Kaman ]
PASIGHAT, Jan 3: Hosts East Siang defeated West Siang on penalty to enter their maiden final in the 18th Tadar Tang State Level Football Tournament (TTSLFT) and set up the title clash with three-time champion Kurung Kumey, who defeated Arunachal Pradesh Police (APP) 2-1 in the first semifinal here in East Siang district on Friday.
Debong Laying Mengu gave the host a startling start, scoring a breathtaking free-kick goal within 15 minutes. West Siang spoiled a golden opportunity to equalize when they failed to convert a penalty. They came back stronger in the second half, and eventually restored the parity in the 73rd minute with a goal scored by Beken Riram.
The match went to tie-breaker after the teams were tied 1-1 at the end of the regulation and extra time.
The hosts won the match 4-2 (5-3) in the penalty shootout.
The first semifinal, played between APP and Kurung Kumey, also went to penalty shootout after they played out a goalless draw at the end of the full and extra time.
The final will be played on 5 January.