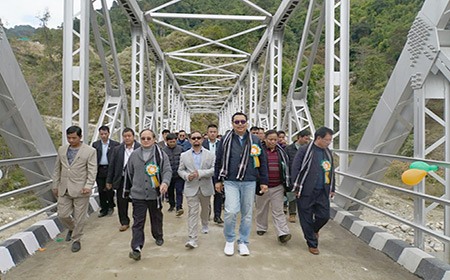 BALAPU, Jan 4: Deputy Chief Minister Chowna Mein informed that survey and investigation work for the 2000-km long Arunachal Frontier Highway along the India-China border has been completed and “it will not take long to start the ambitious road project.”
The frontier highway will connect the border areas from Vijaynagar in Changlang district (in the east end) to Mago-Thingbu in Tawang district (in the west end).
Addressing the gathering after dedicating a steel bridge over the Pare river here in Papum Pare district on Saturday, the DCM informed that the East-West Industrial Corridor along the foothills of the state will also be constructed.
Mein said a high-level board headed by the legislative assembly speaker, which was formed when Mein was the PWD minister in the previous government, “has been assigned to see its alignment.”
Constructed by the PWD, the 75-metre span bridge over the Pare river here had been sanctioned in 2016 under the RIDF.
Dedicating the bridge to the people of Pech-Hoj, Upper Balapu and Balapu villages in Sagalee division, the DCM said that “the bridge is a New Year gift from the government to the people of these remote villages.”
Stating that connectivity is one of the priority sectors of the Pema Khandu government, Mein urged the people of the state to “change their mindsets if they wish to see fast-tracking of developmental activities in the state.”
Stressing the potential of tourism to boost the state’s economy, he said connectivity to remote and far-flung areas is important to boost the tourism industry, and urged the people to create an atmosphere congenial to developing the tourism industry and making the state investment-friendly.
The DCM informed that “short-term and long-term plans have been made under the cabinet committee on infrastructure for robust infrastructure development in the state, and also to upgrade roads in the districts and bring road connectivity to all ADC and SDO headquarters across the state.”
Mein reiterated the state government’s pledge to bring about equitable development of all regions through equal distribution of funds and judicious utilization of resources.
“The state government has brought in financial and administrative reforms, and also adopted an industrial policy to make the state investment-friendly and for ease of doing business in the state,” he said.
Education Minister Taba Tedir, who was also present, spoke about the new education policy, and assured to post teachers at “all the schools in the remote villages.” He appealed to the parents and elite sections of the society to see to it that their children and students are devoting their time to studies. He also called for “creating a peaceful and ambient atmosphere for tourists and investors to come to the state.”
Former chief minister and Sagalee MLA Nabam Tuki submitted a six-point memorandum to the DCM, which the latter assured to look into.
Stating that the people of the state have benefitted a lot from the Trans-Arunachal Highway, Tuki appealed to the people to protect and take care of the infrastructures created by the government for their own good. (DCM’s PR Cell)