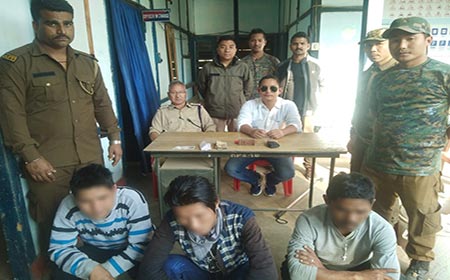 MIAO, Jan 8: The police here in Changlang district arrested three persons on Wednesday in connection with extortion activities.
The police said Chow Ong Singpho (27), Wamu Mossang (34) and Onglat Singpho (28) were involved in extortion activities in the market area.
SDPO Tasi Darang informed that the police received information on Tuesday that some people had extorted money from some shopkeepers in the market.
“Immediately a police team was constituted and a search operation launched,” the SDPO said.
He said that, along with Rs 13,940, a “suspected AK magazine with nine live rounds,” several pieces of paper containing contact numbers, and two ‘Eastern Naga Army’ badges were recovered from the trio’s possession.
A case has been registered at the police station here under relevant sections of the Arms Act and the IPC.
The team that made the arrest comprised Miao PS OC Inspector Ege Ete, SI Jano Aran, and Constables Bikram Chetry, Miaong Singpho, T Jongsam and MN Tikhak.