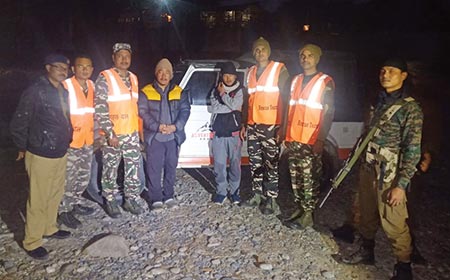 Staff Reporter
BHAIRABKUNDA, Jan 8: Mountaineers Taka Tamut and Tapang Darung helped the Assam police in a search operation to retrieve the body of a youth who had drowned in the Dhansiri river here in Udalguri district of Assam on Tuesday.
The deceased, identified as Raju Markanda (25), was part of a group of picnickers at the Bhairabkunda picnic spot, situated on the border of Bhutan and Arunachal, when he fell off a bridge over the Dhansiri river at around 4:30 pm.
According to the police, a team of Assam police along with NDRF and SDRF teams began the search operation soon after receiving report of the youth’s drowning, but were unable to find the body, owing to loss of daylight.
The Bhairabkunda police station SI informed that the joint search team had to call off the operation at around 5 pm on Tuesday.
“We are grateful to Taka Tamut and Tapang Darung from Arunachal, who, upon hearing the news, contacted us and offered to help us in the search operation. They were able to retrieve the body, which had sunk to a depth of around 30 feet, in the evening today,” he said.
On being contacted by this daily, Tamut said he and Darung heard about the incident while they were visiting Kalaktang, in West Kameng district, for an upcoming adventure festival.
“We had the experience and the expertise, so when we heard about the incident we immediately decided to meet the Assam police to offer our help,” he said.