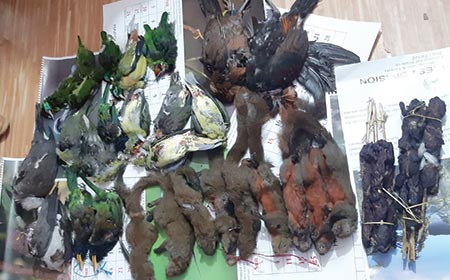 HAPOLI, Jan 8: Thirty carcasses of wild animals and birds listed in Schedule IV of the Wildlife (Protection) Act (WPA), 1972, were seized from here in Lower Subansiri district.
The seizure took place during a raid conducted by a patrolling team of forest officials led by Deputy RFO Talo Dibo at the Abotani market shed on 7 January.
According to forest officials, the carcasses were seized from one Bem Nayo, a resident of Charbia village under Sangram police station in Kra Daadi district. A case has been registered under relevant sections of the WPA and the IPC.
Later, the carcasses were destroyed in the presence of DFO Koj Rinya, Senior Veterinary Officer Kime Gyati, RFO Ngilyang Tachang, and
members of the Arunachal Pradesh Birding Club.
The DFO appealed to the local people to refrain from hunting and buying wildlife meat.
The continuous seizure of wildlife body parts from different parts of the state in the recent past is raising serious concern among conscientious citizens, wildlife lovers, and various organisations.