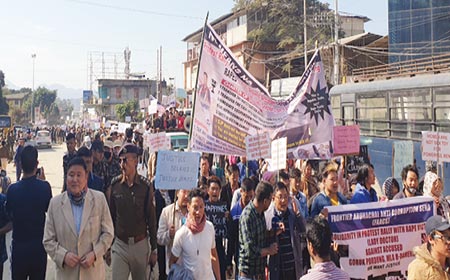 ITANAGAR, Jan 8: Several organisations along with family members and relatives of a woman who had allegedly been raped by Bameng MLA Goruk Pordung took out a protest rally from Akashdeep to the IG Park tennis court here on Wednesday, demanding immediate action against the alleged accused.
Hundreds of supporters from various organisations, including the Tar Anyi Berme Welfare Society, the Pungte Dane groups and the Pungte Dongne groups, the Riika Riibla Welfare Society’s women and youth wings, the alleged victim’s family members and relatives, members of the Arunachal Pradesh Anti-Corruption Students Union, etc, joined the rally.
Addressing the media, the husband of the alleged victim said that the investigation process should be handed over to an independent body to ensure a fair probe.
“Since the alleged accused is an MLA and from the ruling party, he should be immediately suspended from the party as he may influence the investigation process. Also, the government’s slogan of ‘Beti Bachao, Beti Padao’ needs to be taken care of and the (alleged) victim needs to be given proper protection,” he said.
The husband informed that he has filed a case in the Supreme Court, opposing granting of bail to the alleged accused.
“I have knocked the door of all the possible places where I can get justice for my wife. I have faith in the court of law and am hopeful that justice will be delivered to us,” he said.
When reporters approached Pordung for a statement regarding the rally, he said he would respond later, and refrained from commenting further.