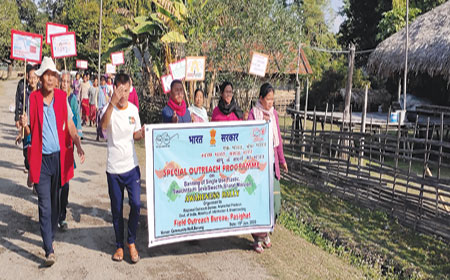 PASIGHAT, Jan 15: A mass awareness rally on banning single-use plastic and the Swachhta Hi Seva programme was held at the community hall in Berung village of East Siang district on Tuesday under the banner of special outreach programme (SOP) by the Field Outreach Bureau (FOB), Ministry of Information& Broadcasting
Addressing the gathering of villagers, and ASHA and Anganwadi workers, JN College Pasighat Associate Prof Dr Tamin Payum informed that “about 95 lakh tonnes of single-use plastic items, especially water bottles are accumulated per annum, out
of which 38 lakh tones get accumulating in various drainages, thereby affecting aquatic life.”
He said that “even if such plastic items are burnt, chemicals like furan and dioxin are released, which is very much harmful to human beings and causes respiratory problems.”
Dr Payum requested the participants to avoid single use plastic and suggested them to “refuse polyethylene carry bags when offered by shopkeepers, to discourage the companies from producing such items.”
Asking villagers to put in their efforts to ban plastic use, Berung village Gaon Burah Olam Panggeng said,”When plastic was not invented, human had survived well with flora and fauna from nature. Leave plastic usage for future generations and betterment of our environment.”
In his keynote address, FPO,FOB Pasighat Mihir Kumar Jha also called on the people to dedicate atleast two hours a week for cleanliness at homes, surroundings, as well as public places.
A quiz competition was also organized during the programme and winners were awarded with attractive prizes.