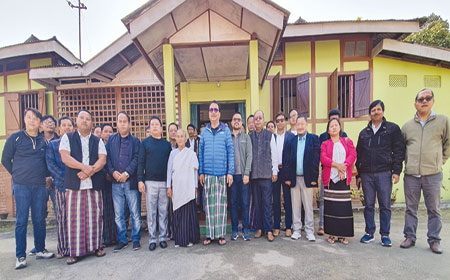 CHONGKHAM, Jan 15: The official launch of the Indrajit Namchoom Arunachal League (INAL) has been scheduled for 26 January this year in Namsai district.
The INAL has been rechristened from the Arunachal Super League in memory of former Indian football team captain late Indrajit Namchoom.
Inspecting the football ground here on Wednesday, Deputy Chief Minister Chowna Mein expressed happiness and said, “This is for the first time that Arunachal is going to host this coveted football league, which will be organized by the Arunachal Pradesh Football Association (APFA) in memory of legendary footballer and former India captain late Indrajit Namchoom.”
“Many youngsters of today’s generation may not know of Indrajit Namchoom. He is known as the pathfinder in sports and considered the first ever sporting hero of Arunachal Pradesh in the truest sense,” said Mein, adding: “Namchoom was the first Arunachalee to represent India in an international football tournament way back in 1964 and perhaps, the first one from Arunachal Pradesh to represent India in any international event. He was an individual who showed why football received such a prestigious tag in the North East.”
The APFA also informed that the INAL would feature six teams, the matches of which would be held at the Sangay Lhaden Sports Academy Ground in Chimpu, near Itanagar.
Earlier, Mein with members of APFA also visited the places where legendary Namchoom had spent his childhood and met with relatives to inform them about the football tournament to be held in his memory.
Later, Mein also inspected the construction of the mini indoor stadium at Chongkham and directed the officers to complete the work on time.
Among others, Namsai MLA Chau Zingnu Namchoom, DC Namsai Bijoy Talukdar, SP Namsai Ankit kr Singh, members of the APFA, led by its honorary secretary Kipa Ajay and officers from various departments also accompanied the deputy chief minister. (DCM PR Cell)