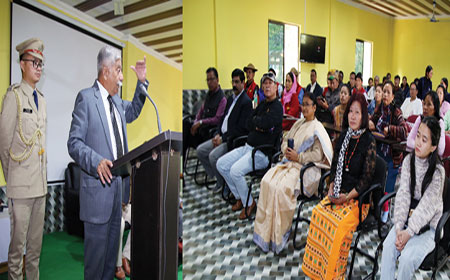 SEIJOSA, Jan 17: Governor BD Mishra stressed the need for a change in the mindset of the youth “from job seeking to startup,” and urged the local youths here to encourage traditional handlooms and handicrafts.
The governor, who is on a two-day tour of Pakke-Kessang district, said this while interacting with GBs, local weavers, government officials and others here on Friday.
He stressed on educating girl children, and said “every child of six years and above must go to school.”
Citing the example of “the highly educated youths of Namsai doing agrarian-based businesses,” he advised the parents and guardians here to motivate their children and wards to become job providers rather than job seekers.
Stating that “empowered womenfolk are sure indicators of a progressive society,” the governor advised the women to preserve and pursue their traditional loin looms and handicrafts for economic and financial empowerment, “particularly in the rural areas.”
He asked government officials to implement developmental programmes, schemes and projects with transparency, honesty and accountability, and urged the GBs to work with sincerity and promote the rule of law.
The governor’s wife, Neelam Misra, distributed yarns to meritorious weavers of the district.
Later, the governor visited the bear rehabilitation centre in the Pakke Tiger Reserve, and interacted with officials from the Wildlife Trust of India. He commended them for successfully releasing 48 rescued bears in the wild. (Raj Bhavan)