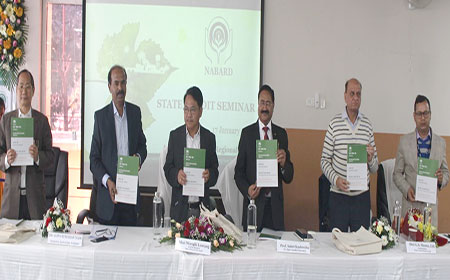 Priority sector advances can grow by about 14%

ITANAGAR, Jan 17: PHE&WS Minister Wangki Lowang unveiled the NABARD’s ‘State focus paper 2020-21’ during a ‘state credit seminar’ conducted by the bank at the DK Convention Centre here on Friday.
At the beginning of the credit planning process in the state, the NABARD prepares potential linked credit plans (PLP), “estimating the sector-wise exploitable potentials for ground-level credit flow from formal financial institutions to different priority sector activities for all the districts, every year,” it stated in a release.
The credit potential estimated
in the PLPs are aggregated at the state level as the ‘state focus paper’, and presented at the state credit seminar.
The document focuses on the bankers’ need to be proactive in providing credit support to farmers and entrepreneurs for capital formation, as well as working capital requirements, it said.
“The activity-wise credit potential estimated by the NABARD form the basis for preparation of the annual credit plans at the district and the state level. Normally, the SLBC completes the credit plan preparation and allocation to various banks by March end, so that the targets are available to various banks in the beginning of the next financial year,” the NABARD informed.
It said the priority sector advances in Arunachal have the potential to grow by about 14 percent from the potential estimated for the current year. “The exploitable credit potential for priority sector in the state for 2020-21 (is) at Rs 712.5 crore, as against Rs 625.8 crore during 2019-20,” it said.
After unveiling the document, Lowang urged the banking community to “give more thrust to disbursement of agricultural loan as the community is deprived by limited resources for investment.”
He commended the NABARD for funding towards the development of the state, and stressed on “proper scrutiny of backward and forward linkages before sanctioning of loan for various rural development projects to avoid NPA, and the need to increase research and development in agriculture and allied activities for doubling the farmers’ income.”
Earlier, NABARD General Manager Gopa Kumaran Nair highlighted the importance of credit in the development of a resource-scarce economy like Arunachal. He urged government organisations, financial institutions and other change agents to “dovetail their developmental agenda for attaining all-inclusive growth, and the NABARD will further strengthen the linkages, especially in the field of infrastructure creation, financial inclusion, institution building, aggregation of farmers, social reengineering, etc.”
RGU Vice-Chancellor Prof Saket Kushwaha, who also attended the event, informed about “commencing agricultural course from next academic year,” and about setting up an incubation centre at the university.
Hydropower Commissioner GS Meena highlighted “the importance, potential and need for removing constraints in hydroelectric power projects, which have tremendous potential to increase the GDP of the state, by creating synergy among the community and the forest and power departments.”
Cooperation Secretary Onit Panyang highlighted the lack of awareness about “financial products” among the public. He suggested enhancing financial literacy, “including strengthening of cooperatives and effective utilization of available infrastructure.” He also informed about the success of the weavers’ cooperatives in marketing their products abroad.
SBI Regional Manager Arup Dutta spoke about his experience with high-tech projects in other northeastern states, and NABARD DGM SS Vaseeharan highlighted the state focus paper, “especially on exploitable credit potential for Arunachal.”
Officials from line departments and representatives from different banks, Krishi Vigyan Kendras and NGOs, along with progressive farmers and entrepreneurs participated in the seminar.