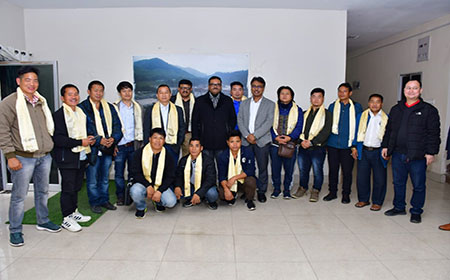 ITANAGAR, Jan 20: Nine villagers and landowners from Upper Subansiri and Dibang Valley districts of Arunachal visited the NHPC’s 4×400 mw and 3×170 mw hydroelectric projects (HEP) on the Teesta river in Sikkim, during an exposure tour conducted by the hydropower development department here.
Accompanied by Hydropower Development SE Durik Kamduk and other engineers, the team visited the dam areas, the powerhouses, and various other components of the HEPs. Officials of the NHPC briefed the participants on the benefits and advantages of hydropower projects.
The participants expressed satisfaction over the development of the areas where the HEPs are constructed, the hydropower department informed in a press release on Monday. It said one Yangkeng Taluk, a native of Janbo village in Upper Subansiri, welcomed power developers to explore the possibility of constructing such projects in his district.