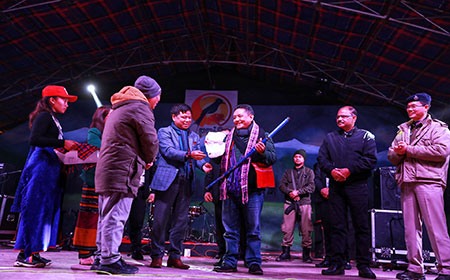 NAMPONG, Jan 21: State Legislative Assembly Speaker Pasang D. Sona has called upon the people, especially the youth, to strive hard for the growth of tourism in the state. Sona said this while inaugurating the second day of Pangsau Pass International Festival in presence local MLA Laisam Simai and other host of dignitaries.
Reiterating that tourism is one of the industries in Arunachal Pradesh which, he said, will create livelihoods for the people and change the economy of the state, the Speaker said, ‘Best investment for growth of tourism is nothing but good behavior and welcoming nature of local people towards the visitors.’
He called upon everyone to contribute and shoulder responsibility for the growth of tourism industry.
Lauding the people of Changlang district, especially the people of Nampong area for making the erstwhile Pangsau Pass Winter Festival a bigger and better one, Sona said that tourism sector grows not because of place or its culture but with the constant efforts put together by its people.
“I’m elated to see that the festival is gaining popularity while boosting the tourism potentials of area,” he added.
Further, he also lauded the local MLA for working hard for development of tourism and other sectors in the area and urged upon the public to extend their supports to him.
The Speaker visited Kovin village near Jairampur, one of the extended festival venues, and witnessed cultural programme. (Speaker media cell)