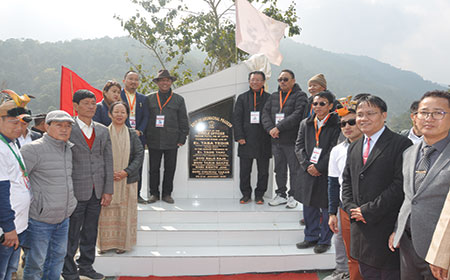 YACHULI, Jan 21: Education Minister Taba Tedir has appealed to all the stakeholders to extend cooperation for construction of Trans Arunachal Highway (TAH). He made this appeal on Monday while laying foundation stone for the establishment of circle office at Loth under Lower Subansiri district. The minister also appealed to the people not to create any hurdle during the TAH construction.
Addressing a huge gathering of local public, Tedir said ‘development can only takes place if the general public extends support and helping hands to the government and executing agency.’
Referring to his election manifesto, Tedir said that establishment of CO HQ at Loth was in the election agenda and he has fulfilled it.
He also announced Rs fifty lacs for the construction of CO office.
Replying to the memorandum submitted by the Upper Yachuli Development Committee (UYDC) Tedir assured to take up the issue of upgradaiton of Loth Middle school to Secondary level.
He also announced that a B class police station with adequate manpower and a model police station will be soon established in Yachuli.
Also speaking on the occasion horticulture minister Tage Taki said that the present government seeks to make administration ‘effective and reach the people at the last mile’.
While narrating the hardships faced to kick start the TAH constructions under Lower Subansiri, he appealed for cooperation from all the public and assist the agency in completing the work in the stipulated time.
“Loth and the adjacent areas have become one of the major producers of cardamom in Lower Subansri. However in absence of good communication and marketing linkages the farmers will always become a scapegoat to the middleman,” he further added while emphasising on the importance of good roads and marketing linkages.
He further informed that installation of cardamom processing units in the districts is in pipeline to further the dream of ‘doubling the income of the farmers’.
Deputy Commissioner Chukhu Takar assured that he would leave no stones unturned in implementing the TAH in his jurisdiction. He also sternly warned against any interventions that would stall the project henceforth.
Aalo East MLA Kento Jini, Raga MLA Tarin Dakpe, Palin-Chambang MLA Balo Raja and others were also present on the occasion.
The visiting ministers and MLAs promised to work in tandem to ensure that the TAH work can be completed in the stipulated time period and that any person creating any obstacles will be dealt with iron hand. They also opined that only good roads can bring along the necessary development and economic vibrancy in the state.
The members who initiated the movement for a circle headquarters 25years back were felicitated on the occasion. (DIPRO with additional reporting from ATNS)