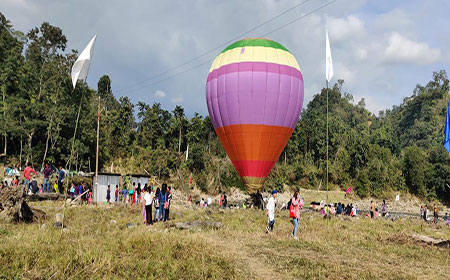 Gohpur MLA calls for cultural exchange between Assam and Arunachal

Staff Reporter
RAMGHAT, Jan 24: The Gohpur MLA Utpal Bora and Doimukh MLA Tana Hali Tara on Friday attended the second day of ongoing Papum Poma River Festival (PPRF) 2.0 here under Papum Pare district.
While addressing a huge gathering, Gohpur MLA Bora urged the people to keep alive rich culture and tradition terming them as identity of the people. Appreciating the PPRF-2020 committee members for organizing such kind of festival, he said it would offer opportunities for cultural exchange between Assam and Arunachal Pradesh to help better relations between two states.
He also assured that very soon this kind of festival will be organized at Gohpur, Assam and cultural team from Arunachal Pradesh will be invited.
Local MLA Tana Hali, in his address, said people of both the states face similar kind of problems, and therefore there is need to join hand together. He also called for keeping river free from pollution.
Large numbers of visitors from neighbouring Assam are also visiting the festival. The main attractions include adventure activities like river rafting, zip line, hot air balloon, cultural programmes.
While talking to media persons, chairman of Papum Poma River Festival 2.0, John Panye informed that festival is rare opportunity for the people of the capital complex to spend quality time with their family members.
“Ramghat has several things to offer to visiting tourists including pristine river, natural lake, etc besides the various adventure activities which is part of the ongoing festival. Through this festival we also want to promote eco tourism and also cultural exchanges between Assam and Arunachal Pradesh. This will enhance communal harmony in a sensitive border area like Ramghat,” he said.
He also expressed gratefulness to union minister of state (independent) for youth affairs and sports Kiren Rijiju for announcing Rs one crore towards the festival. “We will take this festival to higher level with such kind of support. We also would like to acknowledge the support of tourism department,” he added.
The festival was declared open on Thursday by union minister Kiren Rijiju. The three-day festival will conclude on Saturday.