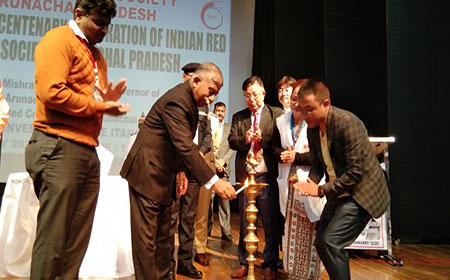 Staff Reporter
ITANAGAR, Jan 29: Governor BD Mishra emphasized on the need of strengthening the Indian Red Cross Society (IRCS) in Arunachal to reinforce the state’s disaster management capacity.
Launching the centenary celebration of the IRCS, Arunachal Pradesh at the Dorjee Khandu Convention Centre here on Wednesday, Mishra
Emphasizing the need to empower voluntary organizations by the state government at all levels, the governor, who is also the president (Nominated) of the IRCS, Arunachal Pradesh, strongly stressed for dedicated and selfless service by the members so that more people are benefitted.
“We should stress more on doing and serving with what we have rather than pondering more on what we lack,” advised the governor.
He also lamented on the sense of responsibility by the officials towards public service, and expressed serious concerns.
“There is need for the Indian Red Cross Society in Arunachal Pradesh to evolve into such an organization which can respond to any disaster or emergency situations,” the governor stressed.
Health & Family Welfare Secretary P Parthivan acknowledged the huge gap in human resources and infrastructure in the department of Health across the state. Adding that the health sector in the state is “going through a phase,” he suggested that the Indian Red Cross Society members remain active and induct more members to work in nooks and corners of the state.
Making presentation on the activities to be carried out by the IRCS-AP, its honorary secretary Dr Emi Rumi informed that blood donation camps and disaster mitigation had been the core focus of the organization in 2019.
“The organization needs hand-holding by the state government, corporate and financial institutions in the state,” he said.
Outlining the activities to be carried out, he added that the month of January was dedicated to Junior Red Cross & Youth Red Cross activities, while blood donation camps and Swachh Bharat activities will be organized during February and March this year, respectively.
Dr Moli Basar and team from the Tomo Riba Institute of Health and Medical Sciences, Naharlagun made demonstration on first aid and its administration.
A team of the National Disaster Response Force from Doimukh, students from various schools and colleges and members of the Arunachal Voluntary Blood Donors Organization participated in the programme.
The Indian Red Cross Society is a voluntary humanitarian organization founded in 1920 by Claude Hill and is part of the International Red Cross and Red Crescent Movement. The society’s mission is to provide relief in times of disasters or emergencies and promoting health and care of vulnerable communities.