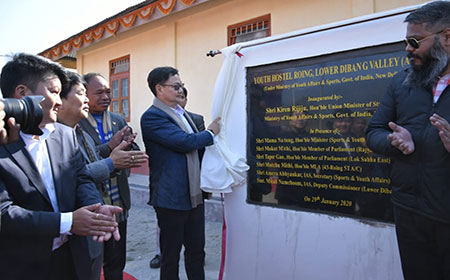 ROING, Jan 29: Union Minister of State for Sports and Youth Affairs Kiren Rijiju expressed dismay over the “inability of the state to send talented sportsper-sons to the Asian Games and Olympics till date.”
Inaugurating a youth hostel at Ezengo in Lower Dibang Valley district on Wednesday, Rijiju cited lack of good sports infrastructure as the cause for such inability.
Speaking on the promotion of sports in the state, he said “a lot of facilities to encourage sports are being provided so that our children are not deprived of sports facilities.”
He was hopeful that with the coming up of a ‘Centre of Excellence for sports’ at Itanagar, Arunachal would be well represented in various national and international sports events.
The Union minister also emphasised on the need for timely utilization of central funds. Speaking on central government funded infrastructure development projects in the state, Rijiju said, “Lack of utilization of funds leads to project cancellations, which in turn hampers development and leads to the suffering of the public.”
He enjoined all to ensure that no scheme is delayed due to litigation.
Dedicating the youth hostel to the people, Rijiju advised the good upkeep of the property to make it a model youth hostel. He advised all the students to look ahead towards the future with positive mind.
Rijiju also advocated the setting up of industries to utilise abundant natural resources “which would solve unemployment problems of the state.” At the same time, he stressed on the need for preservation and protection of environment and traditions.
State’s Youth Affairs and Sports Minister Mama Natung added that ‘Team Arunachal’ is determined to create good sports infrastructure and bring forward talented sportsmen of the state.
MLA Mutchu Mithi and Deputy Commissioner Mitali Namchoom also spoke. The dignitaries present also unveiled a calendar sponsored under the ‘Beti Bachao, Beti Padhao’ campaign.
MP Mukut Mithi, Sports Secretary Ameya Abhyankar and Sports Director Ramesh Linggi, among others, were present in the inaugural function. (DIPRO)