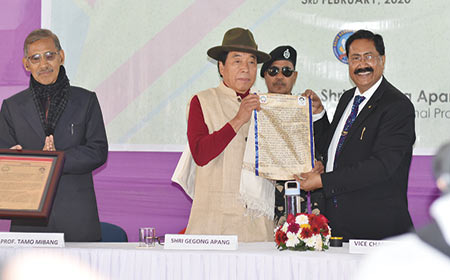 RONO HILLS, Feb 3: Former chief minister and founder figure of Rajiv Gandhi University (RGU), Gegong Apang, launched the two-day celebration of the university’s foundation day by inaugurating the newly-constructed building of RGU’s physics department here on Monday.
Addressing the gathering, Apang, who was instrumental in establishing the university in Rono Hills, shared his experiences and recalled the circumstances leading to the establishment of the university. The foundation stone of the university had been laid in his presence on 4 February, 1984.
Apang spoke about the obstacles that he faced in having the university established, and urged the university’s community to play a vital role in making Arunachal a better state.
He praised the current Vice-Chancellor, Prof Saket Kushwaha, as someone “who is actively taking a personal interest in all-round development of the university.”
Former RGU VC, Prof Tamo Mibang, said Apang had “a great heart” as a CM, and reminded everyone that the university was declared a central university under his (Apang) leadership.
Senior professor SK Singh spoke about the “life and struggle of Gegong Apang,” while Prof Nani Bath of the political science department dwelt on the “highs and lows of the political life of Gegong Apang.” He recalled the various tough political decisions that the former CM had to take in making the state “as it stands today.”
Prof Kushwaha in his address spoke about the need to “inculcate zeal within oneself in performing one’s duties.” He also spoke about “understanding the route and path of oneself in finding a better solution to the problem in hand.”
The VC said the celebration of the foundation day is “the right time to introspect and find out the right route and method to follow.”
He thanked Apang for his “never-tiring attitude in fulfilling the dreams and aspirations.”
RGU Pro-Vice-Chancellor, Prof Amitava Mitra, spoke on the “importance of foundation day celebrations,” while Registrar, Prof Tomo Riba, shared some of his personal anecdotes with the former chief minister.
The programme was also attended by several local gaon burahs, along with the university officials and other senior faculty members, besides a host of other dignitaries.
As a part of the celebration, the RGU Students’ Union organised a ‘cross-country race’ in the morning, from Gumto to the university campus. It saw the participation of 70 people.
In the men’s category Bamo Tanang stood first, while in the women’s category Sorang Yumi stood first. In the veteran category Dr Kago Gambo took the first position and Dr Tadang Minu secured the runner-up spot.