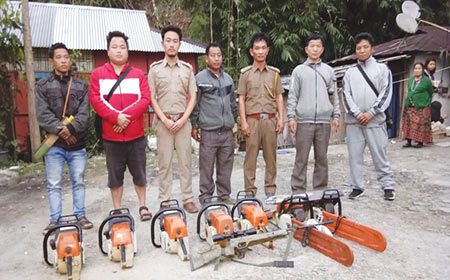 Staff reporter
ITANAGAR, Feb 4: The field staff of the Lobi wildlife range seized eight power chainsaws and a telescopic air gun from illegal timber operators during patrolling in Borum and Daria Hills areas under the Itanagar wildlife sanctuary on 31 January.
The officials also arrested eight persons in this connection but were forced to release them after a crowd blocked the road, Deputy Chief Wildlife Warden (DCWLW) Umesh Kumar told this daily over telephone.
“The returning team with the arrested persons was stopped by a crowd by way of blocking the road. We had no other option but to release them,” Kumar said.
“The situation was very tense in view of the crowd having pistols with them,” he said.
Kumar also informed that at present there are no arms available with the DCWLW office for its staff.
“My staffers are now asking for arms,” he said, and urged the PCCF (HoFF) and the CWLW to consider the demand for purchasing arms for the staff.
He said that the seizure list has been submitted to the police.
The patrolling team was led by DFR Tadar Raju and Forester Tenzing Norbu Thongdok. The seized timbers were later destroyed.