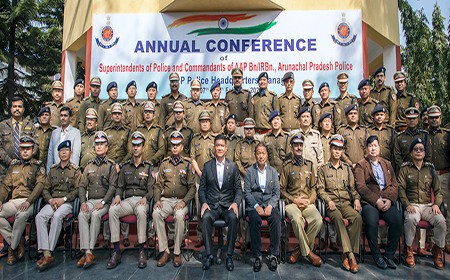 ITANAGAR, Feb 7: Stressing on the need for “innovative policing tactics specific to diverse communities of Arunachal,” Chief Minister Pema Khandu on Friday said improved law and order would pave the way for development in the state.
Addressing police officers during the annual conference of the SPs and the commandants of the APP Bn/IRBn at the APP headquarters here, Khandu said law and order challenges vary from each district and tribe and the police force must act accordingly.
“The sentiments, ethos and sensitivities of the people are different, which call for inclusive and innovative tactics in policing. I advise you all to take community leaders into confidence in all matters related to law and order,” he said.
The CM said that the pace of development would accelerate only in a peaceful environment.
He said that with the encounter killing of the person accused of murdering senior police officer Bomto Kamdak, arrests of drug peddlers and militants, and seizure of a large number of stolen vehicles, “the force has gained the trust of the people.”
The chief minister assured to provide budgetary support to strengthen the police, and asked the officers to prioritize proposals that can be implemented in the next five years.
Home Minister Bamang Felix asked the police officers to work towards improving the intelligence-gathering system. He also called for overhauling the special bureau of the state police.
“The budgetary allocation to the state police has been tripled to Rs 150 crore from Rs 50 crore,” Felix said.
Both Khandu and Felix stressed on the need to focus on the capital region, where they said 90 percent of the law and order issues of the state occur.
The home minister said the ‘Hamara Arunachal Abhiyan’ “is bringing the people closer to the police.”
He also said promotions and recruitments have substantially boosted the morale of the police personnel.
Forty police vehicles, including SUVs, buses, anti-riot vehicles and fire tenders, were flagged off on the occasion by the chief minister in the presence of Felix, DGP RP Upadhyaya and other police officials.
Our correspondent adds: Later, addressing media persons, Khandu said his government’s top priority is to strengthen the police force.
“The state government will accept whatever suggestions or recommendations the police department comes up with after this three-day conference,” he said, and informed that there would be adequate fund provision in the upcoming budget to further strengthen the police force.
Regarding the current global outbreak of the novel coronavirus, Khandu said he has already alerted the health department to take all preventive measures in all the districts.
Stating that the health department is closely monitoring the situation, the CM said the Changlang district administration has temporarily closed down the Pangsau Pass market along the Indo-Myanmar border to prevent possible outbreak of the virus.
The DGP informed that the police department is coming out with a vision document for the next five years.
“The emphasis of this document will be on providing effective police service at police station level. Specialized units to tackle greater security threat in the state will also be covered in it,” he said.
“There shouldn’t be PHQ-centric planning,” stated the DGP, and informed that the conference is being held for three days to enable “the officers who are actually serving in the districts to give us the factual ground report and exact requirements.”
Responding to a question on the Sharjeel Imam case, the DGP said a “production warrant has already been put up in Delhi,” adding that Imam would be brought to the state for questioning “as soon as he is found.”
“The capital police are doing a tremendous job and it has successfully unearthed a big nexus of people involved in selling of high-end vehicles in the state. This gang has its network upto Delhi and the police are onto it,” he said, replying to another question. (With input from CM’s PR Cell)