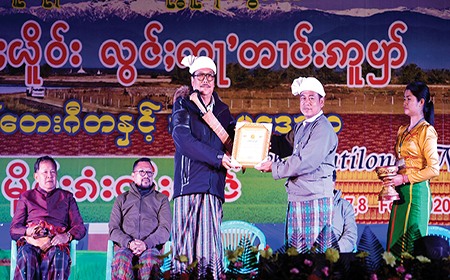 PUTAO, Feb 7: Deputy Chief Minister Chowna Mein emphasized on reopening the Stilwell Road, or Ledo Road, to “ease travel and cut distance for people living on either side of the area.”
The DCM said this while attending the Poi Kongmu Loung Chow Kaang-kham celebration here in Kachin state of Myanmar on Thursday.
Stating that Myanmar shows the route to India to larger ASEAN nations, Mein said, “India’s ‘Act East Policy’ is on the lines of improving people-to-people contact, which is fundamentally envisaged for building socio-cultural relations, increasing trade ties, promoting tourism, and developing the economic scenario of the South East Asian region through outreach initiatives.”
He said he was delighted to know that connectivity with Northeast India “has got prominence in the North East Region Vision Document-2020 of the Myanmar government.”
He said opening up trade routes would expand economic opportunities in the region and accelerate its growth, “which would be beneficial for both India and Myanmar.”
The DCM commended the Myanmar government “for allowing the presence of a large Buddhist cultural delegation from Arunachal Pradesh, India, at Putao.” He said such gestures would deepen the socio-cultural relations between the people living on either side of the border, with shared beliefs, language, culture and social structure.
The annual festival is celebrated to pay homage to the 2320 years old pagoda, which is believed to house the relics of Lord Buddha from an earlier incarnation as Kaang-kham (Golden Deer). It is widely believed that paying obeisance at this pagoda fulfills wishes.
Earlier, Mein along with Kachin’s Chairman of Parliament, U Tun Tin, Kachin’s State Minister for Ethnic Affairs, U Sai Sein Lin, and Putao District Administrator Thant Zin inaugurated the festival.
Mein also inaugurated a newly constructed stone stupa, called ‘Peace Pagoda’, here on Friday.
The DCM was accompanied by DoTCL Minister Wangki Lowang and Namsai MLA Chow Zingnu Namchoom. (DCM’s PR Cell)