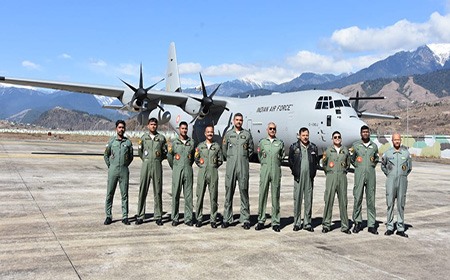 TEZPUR, Feb 13: Eastern Air Command Air Officer Commanding-in-Chief (AOC-in-C), Air Marshal RD Mathur, assessed the operational preparedness of the advanced landing grounds (ALG) in Mechuka (Shi-Yomi district) and Tuting (Siang) on Thursday.
He was accompanied by Jorhat Air Force Station Air Officer Commanding, Air Commodore MK Jha.
The officers were briefed by senior IAF and Army officers on the operational readiness of the two airfields which are not only important for the local administrations in extending their reach to the residents of the remote areas but also crucial from the strategic point of view.
Interacting with the air warriors manning the ALGs, the AOC-in-C urged them to be vigilant and “ready to undertake any task at the shortest notice for the success of operations launched by the Air Force and the Army,” the Tezpur-based defence PRO informed in a release.