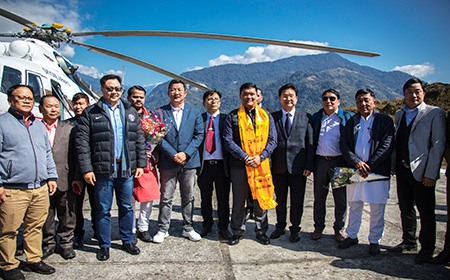 TALIHA, Feb 13: Urging the people of Upper Subansiri district to cooperate with the government in the process of development, Chief Minister Pema Khandu on Thursday said several important road projects in the district are pending because of compensation issues.
Addressing a public meeting at Kodak village in Taliha constituency, Khandu also said that “smooth connectivity to Itanagar and the construction of the road from Taliha to Tato are being delayed due to compensation issues.”
He said the people of western Arunachal should learn from eastern Arunachal, “where development is prioritized over seeking compensation.”
“Community apex bodies have been very effective in solving compensation issues and in convincing people to not hamper development process by demanding compensation. Similarly, community apex bodies in western Arunachal can play an effective role in expediting the development process,” the CM said.
He said though Arunachal has huge potential in sectors like hydropower, agriculture, mines and minerals, they have not been utilized to their full potential “because of our own weakness to overcome shortcomings in policy decisions, bureaucracy, and in exerting political will.”
Seeking cooperation from the local MLAs and government officers, the CM requested them to prepare robust plans and prioritize schemes.
He informed that “funds under MLA will be increased, so that development in respective constituencies can be boosted.”
Responding to public demand, Khandu assured to have a Jawahar Navodaya Vidyalaya established in the district, and to take up with the BRO the matter of expediting the work on the Tato-Taliha road.
He also said he would soon convene an all-party meeting “to decide whether the upcoming panchayat election will be fought on non-party basis.”
“The decision will be taken as per the outcome of the meeting,” he said.
MoS (Independent) for Sports & Youth Affairs, Kiren Rijiju, Tourism Minister Nakap Nalo, and MLAs Nyato Rigia, Rode Bui and Tanya Soki, among others, were also present. (CM’s PR Cell)