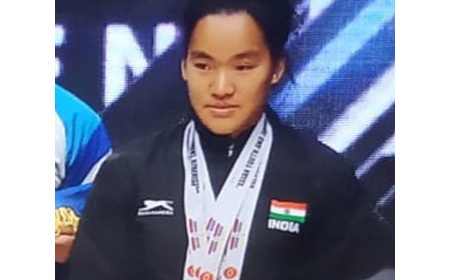 ITANAGAR, Feb 14: Boni Mangkhiya of Arunachal, representing India, won a bronze medal in the Asian Youth and Junior Weightlifting Championship in Tashkent, Uzbekistan, on Friday.
She lifted 69 kgs in snatch and 93 kgs in clean & jerk, for a total of 162 kgs.
Mangkhiya had won a silver medal in the third Khelo India Youth Games held in Guwahati, Assam, in January.
Two other lifters from Arunachal, Markio Tario and Golam Tinku, will be in action on Saturday.
Both Tario and Tinku had won a gold medal each in the Khelo India Youth Games held in Guwahati.