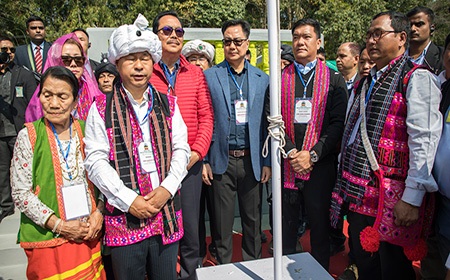 TEZU, Feb 14: Chief Minister Pema Khandu urged the Mishmi community to preserve its rich culture and heritage, saying tourists come to Arunachal to see the local customs and traditions.
Attending the golden jubilee celebration of Tamla Du festival here in Lohit district on Friday, the CM encouraged the people to speak in their local dialects, and promised that the state government would provide its best support for preservation of the local dialects.
Khandu also advised the Mishmi community to make use of its “vast land resource, stretching from the flood plains near the Assam border to the alpine forests in high-altitude areas near the India-Tibet border.”
He inaugurated a free skill training programme for electricians and solar technicians, sponsored by the Art of Living, Schneider Electric, and the state government, besides inaugurating the Sunpura SBI branch and the clock tower and the welcome gate here.
Deputy Chief Minister Chowna Mein, who also attended the festival, said the state government is providing every possible support for protection, preservation and promotion of the indigenous tribal culture “which is dwindling away day by day.” He said it is for this reason that the Pema Khandu-led government has created the department of indigenous affairs.
“We have provided some fund to the research department last year to make documentation of traditional healing system of Idu-Mishmi, which is in the verge of completion,” Mein said.
Union MoS (Independent) for Sports & Youth Affairs, Kiren Rijiju, also spoke.
Earlier, the CM offered prayers to almighty Amik Matai-Ringya Jawmalu, made offerings, and unfurled the festival flag. He also visited the traditional Mishmi hut set up at the venue.
A large number of dignitaries, including MLAs Dasanglu Pul, Gum Tayeng, Karikho Kri and Jummum Ete, and former ministers Dr Mohesh Chai and Khapriso Krong attended the celebration.
Meanwhile, coinciding with the golden jubilee Tamla Du festival, Tezu MLA Karikho Kri and Youth Affairs Director Ramesh Linggi flagged off the six-day Mishmi Hills Challenge MTB Cycle Expedition-2020 from the festival ground.
Twenty-two reputed riders from across the country will cover a distance of 250 kms during the expedition. The event is jointly organised by the youth affairs department, the Arunachal Cycling Association, and the Lohit district administration. (CM’s PR Cell & DIPRO)