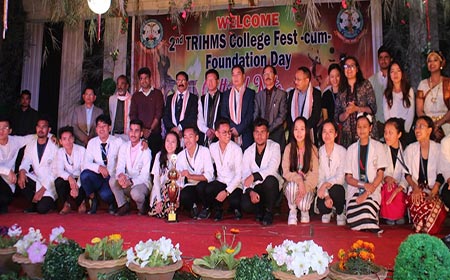 Staff Reporter
NAHARLAGUN, Feb 15: Health & Family Welfare Minister Alo Libang advised the students of Tomo Riba Institute of Health & Medical Sciences (TRIHMS) here to always think of serving the people of the state first, once they become doctors, “as the state needs their dedicated service more, in view of the limited health facilities, especially in the remote areas.”
He was addressing the valedictory function of the second edition of the month-long festival, AURORA-2020, of the TRIHMS college, held concurrently with the institute’s foundation day celebration at the institute’s cultural ground on Saturday.
Stating that the people of the state have great expectations from the medical students, the minister advised them to study hard and become role models for
the society by serving in remote areas of the districts where villagers are suffering due to absence of health functionaries.
Congratulating the students on the occasion, Libang urged them and the faculty members to work hard and take the institute to newer heights of excellence.
“I hope that the institute continues to grow and become the best in the country,” Libang said, and assured them of the state government’s commitment to further develop TRIHMS.
Earlier, TRIHMS Director, Dr Moji Jini, said the institute, which was inaugurated by Prime Minister Narendra Modi on 15 February, 2017, has come a long way since the initial years.
He, however, said TRIHMS “is still growing and it still has much to achieve.”
Seeking cooperation from the people in ensuring that TRIHMS provides better services, Dr Jini also called for “a change in the general attitude of the health functionaries.”
He expressed appreciation for Education Minister Taba Tedir for granting a fund of Rs 5 lakhs from the Dr Taba Nirmali Fund for awarding the meritorious students of the institute.
Tedir, who also attended the event, lauded the facilities available at TRIHMS, and termed the various schemes undertaken by the state government “a boon for the people of the state.”
Citing the example of his late wife, Dr Taba Nirmali, who was instrumental in establishing the Arunachal Cancer Society, the minister advised the medical students to “serve patients with kindness and compassion and not consider the noble profession a profit-making one.”
“Doctors usually do not want to serve at CHCs and PHCs in remote areas, which is a sad reality. They should realize that they have a responsibility towards the state,” he said, and urged the students to always be ready to serve in remote areas of the state.
The minister also informed about the state government’s initiative to provide fund for students appearing in the NEET and the IIT exam.
Underscoring the need to establish more institutes like TRIHMS in the state, Health Secretary P Pratibhan said “more political will is needed to ensure the development of the state’s health sector.”
RGU Vice-Chancellor, Prof Saket Kushwaha, and Aalo MLA Kento Jini also spoke.
Later, the college’s magazine, TRIHMAG, was released.
Earlier in the day, Libang and Tedir flagged off three advanced life support ambulances, two buses, and a mini-truck. The ministers also inspected the new academic block and new men’s hostel of TRIHMS.