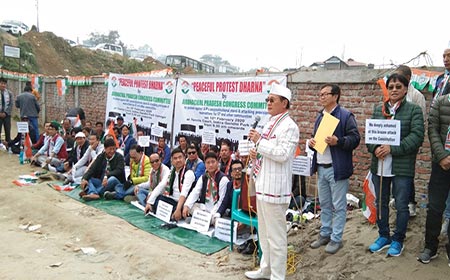 Staff Reporter
ITANAGAR, Feb 15: The Arunachal Pradesh Congress Committee (APCC) staged a peaceful protest at the IG Park tennis court here on Saturday against what it called ‘the BJP’s unconstitutional stand and attack’ on the reservation enjoyed by the scheduled tribes (ST), the scheduled castes (SC) and other minority communities.
Claiming that the recent judgment passed by the Supreme Court, wherein the apex court held that “the state government is not bound to make reservations for STs and SCs in matters of promotions, nor can it be directed to provide reservations for appointment in public posts,” was the doing of the BJP government in Uttarakhand and the NDA government at the Centre, APCC chief Nabam Tuki said “the Congress party is against this judgment and the anti-reservation policy of the BJP.”
“It will be disastrous for our people, especially the northeastern states, where the majority of the people are from the ST category,” he said.
“The government of India should immediately formulate and pass a law to protect the SCs, STs and other backward communities in light of these latest developments,” he added.
Tuki, who is a former chief minister, said the Congress party will file a review petition against the judgment in the Supreme Court.
“If the INC government comes into power, we will demand for doubling the present reservation quota given to the STs, SCs and other communities,” he said.
Veteran Congress leader and former home minister L Wanglat said, “The country is heading to terrible state of affairs.
They want only those at the upper echelons of the society while ignoring the marginalized communities.”
He also questioned the absence of students from numerous educational institutions at the protest, saying “their rights are about to be taken away, and it is the youths who will be at the receiving end in the near future.”
Later, the APCC submitted a representation, demanding protection and reservation for SCs, STs and OBCs in appointments and promotions, to the president of India through the governor.
While hearing on the matter relating to Mukesh Kumar & Anr vs the State of Uttarakhand & Ors recently, the apex court held that “no mandamus can be issued by the court directing the state government to provide reservations.”
It further held that “in view of the law laid down by this court, the state government is not bound to make reservations.”