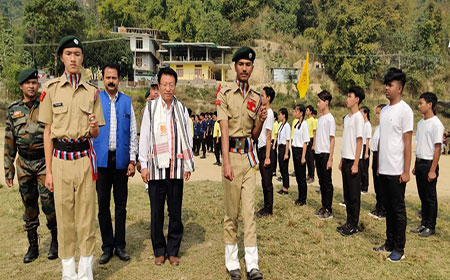 Staff Reporter
ITANAGAR, Feb 16: Expressing concern over the illegal encroachment on the premises of Rajiv Gandhi Government Polytechnic (RGGP) here, Education Minister Taba Tedir appealed to all the encroachers to voluntarily surrender the encroached areas.
He made the appeal on Sunday while attending the annual festivity of RGGP, known as REILA (Recreation, Entertainment, and Information & Literary Activities).
“The government will look into the issue, but I urge the people who have encroached on the land belonging to institute to surrender them. The RGGP is an asset for the state. Who knows, one day the children of these encroachers might also study in this institute,” Tedir said.
The minister also urged the students to ask themselves what they could contribute to the society, the state and the country.
Stating that the Pema Khandu-led government is according priority to the education sector, he cited the example of the adoption of the Arunachal Pradesh Teachers Transfer and Posting Policy.
“Under the new policy, transfer and posting will be done through online, following the guidelines, and there will be no scope for political intervention,” Tedir said.
Responding to a memorandum submitted by the students’ union of RGGP, the minister assured to take up the requirements in phases, “with special emphasis on improving the sports infrastructure of the institute.”
He commended RGGP for getting accreditation from the National Board of Accreditation (NBA).
The minister later visited the classrooms, the library, and other facilities at the institute.
Arunodaya University vice-chancellor VN Sharma, who also attended the event, advised the students to work hard to achieve success. “Make yourself so worthy that people start looking for you,” he said.
Earlier, RGGP Principal, Dr AK Tripathy, highlighted the achievements and problems affecting the institute.
“Our students are performing very well in academic field, as well as in other fields. This year we have managed to get accreditation of NBA, which will immensely help in the growth of RGGP,” he said.
He cited encroachment and trespassing as the main issues concerning the institute, and requested the minister to look into the matter seriously.
The general secretary of the institute’s students’ union, Lishi Paki, submitted a memorandum to the minister, containing demands including upgrading of RGGP to a degree engineering college; repairing and maintaining the institute’s boundary wall; constructing a water storage tank of 1 lakh litre capacity; establishing smart classrooms; and repairing the old boys’ and girl’s hostels.
Students’ proctor Nyari Techi also spoke.
Students presented a cultural performance, and NCC cadets presented a demonstration.