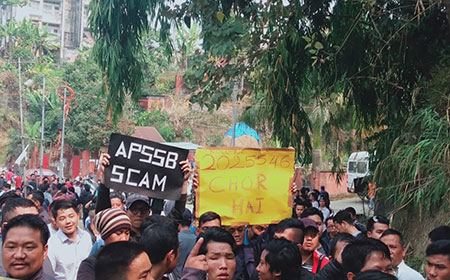 ITANAGAR, Feb 17: After the allegation of corruption in the recently held examination for lower divisional clerk (LDC) and junior secretariat assistant (JSA) surfaced, hundreds of students marched towards the Arunachal Pradesh State Selection Board’s (APSSB) office here on Monday, seeking fresh examination within a month and immediate suspension of APSSB Chairman AC Verma, Secretary-cum-Controller of Examination SK Jain, and Undersecretary Kapter Ringu within two days.
A few candidates and student leaders also met with the APSSB’s chairman, secretary, and member GS Meena, and demanded that the chairman, the secretary and the undersecretary resign on moral ground.
“We are not here to make a request or submit anything. We simply want to give an ultimatum for you to resign within the next two days. You do not have any moral right to hold this office right now,” the candidates told Verma during the meeting.
When the chairman asked for any other claims or proof of the alleged corruption, the candidates said, “What is the point of constituting an SIC team if we have to look for proof? If you think there has been no wrongdoing on your part then why don’t you prove it to the candidates? You are the head of this office. If you are not involved then find the culprit within two days and bring them in front of the public, or resign.”

We follow govt’s decision: Verma
On the demand for resignation, Verma informed reporters that the APSSB is not an autonomous board, unlike the state’s public service commission.
“Serving officers are posted here. It is for the government to take a view in this matter and we have to follow the decision of the government,” he said.
On the suspicious OMR sheet, bearing the roll number 2025546, doing the rounds on social media, Verma said: “We are unsure when the snapshot of the sheet was taken. The exam was over at 1 pm. If it was taken after that, then it is a cause of concern. However, if it was taken near about 12:15 pm or 12:30 pm, then we cannot consider it as being significant as many candidates begin marking towards the end of the exam.
“Until we find out when the photo was taken, it would not be appropriate to comment on it, and the SIC has also been called in to find out the same,” Verma said.
The chairman informed that the candidate in question has also been identified but since the SIC is investigating the case, the board has not made contact with the candidate.
On the role of the APSSB in conducting the examination, he informed that the board is entrusted with the task of setting the question papers and ensuring that they reach the exam centres securely.
“Duties such as arranging invigilators and other requirements are managed by the deputy commissioners,” he said, adding: “The school in question is Eklavya Public School in Jollang, whose arrangement was under the Papum Pare deputy commissioner.”
Claiming that the board’s arrangement was foolproof, Verma said that officers nominated through the deputy commissioners and the sector officers bring in sealed trunks to the board’s office, which are then kept in a strong room under CCTV surveillance.
“The strong room also has three locks, the keys of which are in the possession of different officers. Scanning of the OMR sheets is also done under CCTV surveillance,” he said.
While reiterating that there is no question of underhanded dealings having occurred, he did not rule out “mishaps at the exam centre in question” as the board does not manage the exam centres directly.
“We provide a standard operating procedure (SOP), but it is upto the nodal officer, magistrate and sector officers from the DC’s office to ensure it is followed through at the exam centres. We have safeguarded the OMR sheets, so if something has happened in the school level then it is a serious matter,” Verma said.
“We are trying to find out if there have been any lapses in the SOP and, if found, we will work on strengthening it,” he said.
Later in the day, some candidates met with Chief Secretary Naresh Kumar and placed their demand for suspension of the APSSB officers and their imprisonment under appropriate sections of the law, besides seeking fresh examination, without additional examination fees, and conducting future APSSB examinations in the capital complex only.
They also demanded that the candidate bearing the roll number 2025546 in the APSSB LDC/JSA written examination be asked to come forward and reveal the names of the officials involved in the scandal, or be debarred from sitting for examinations for lifetime and face legal action.
Their other demands included furnishing of answer keys the very next day of the written examination; inclusion of the APSSB examination results under the purview of the RTI Act; displaying of the marks of selected students on the APSSB’s website; and installation of CCTV cameras in all classrooms of the exam centres.

Candidates warn of protest
While the chief secretary assured to look into the demands, the candidates cautioned that they would launch a series of democratic movements if the demands are not fulfilled within two days.
The candidates’ protest was supported by the Rajiv Gandhi University Students’ Union and student leaders from various other organisations.

Rs 7 lakhs for a post
Meanwhile, new information has come to light with candidates claiming that a candidate in Namsai paid Rs 7 lakhs to an employee in the APSSB to clear the examination.
While sources in Namsai disclosed the candidate’s name, they could not provide the roll number or any evidence to back up the claim.

SIC begins investigation
Members of the Special Investigation Cell (SIC) visited the APSSB office and Eklavya Public School on Monday to carry out investigation.
SIC SP M Harsha Vardhan informed this daily: “We are investigating in full earnest. As it is an ongoing investigation, I am unable to reveal much at this stage. We are fully on the job. Some amount of time is needed for investigation as lots of evidence has to be processed. But we will solve the case.”
He also assured to look into the matter of the alleged bribery as part of the same case.
About 30,000 candidates appeared for the APSSB examination at 80 centres, spread across different districts of the state, on 2 February.
The results were declared on 14 February, and a blank answer sheet with the roll number 2025546 was seen doing the rounds on social media on 15 February, creating a furore among candidates.