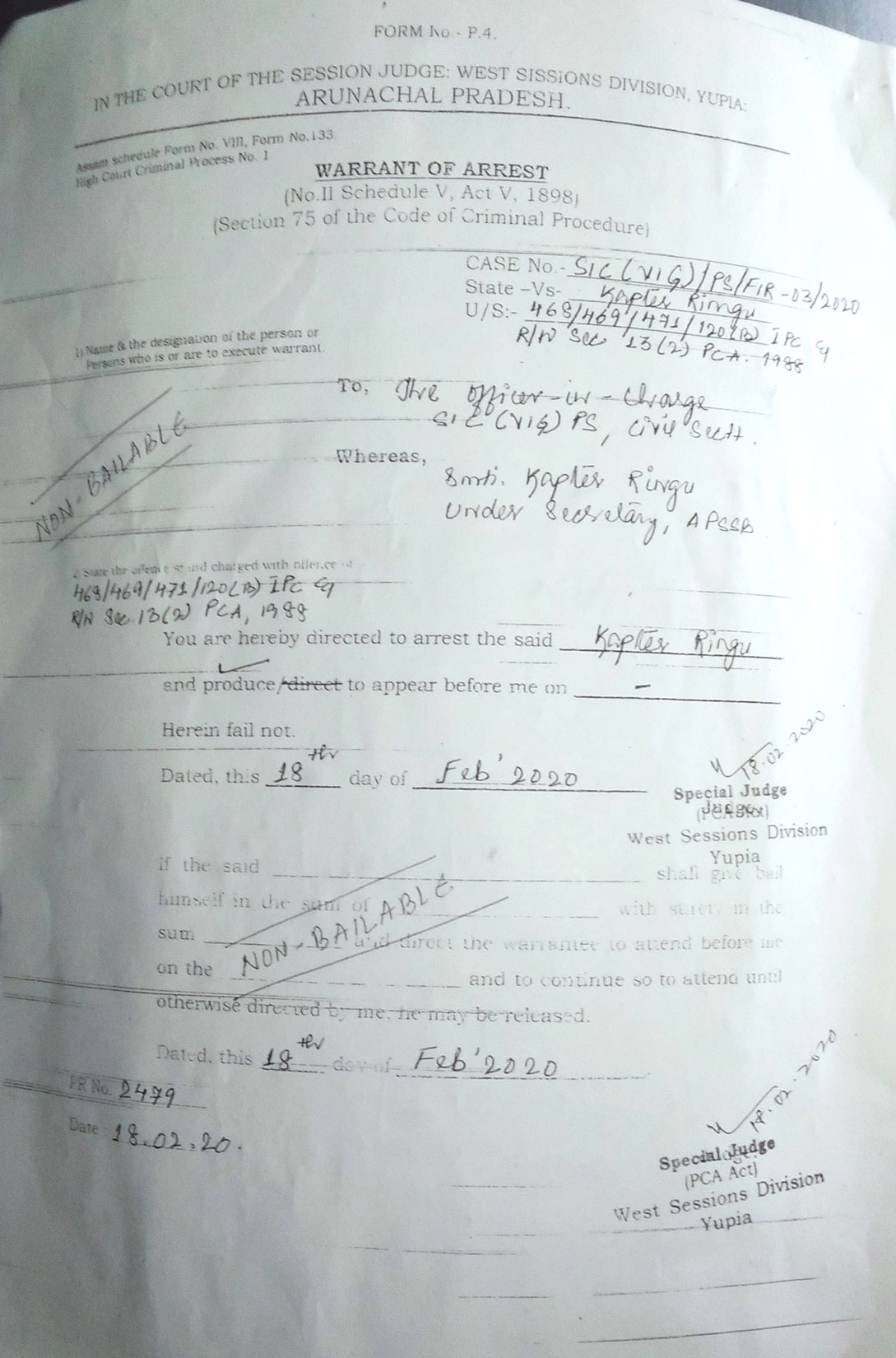 [ Nellie N Manpoong ]
ITANAGAR, Feb 18: The special investigation cell (SIC) has made a major headway by arresting two persons in connection with the alleged corruption that occurred in the examination conducted by the Arunachal Pradesh State Selection Board (APSSB) on 2 February.
The two have been identified as Senia Bagang and Mongam Basar (29).
Bagang was the candidate bearing the suspicious roll number, 2025546, and Basar acted as the broker.
“It is to be noted that Basar is not an employee at the APSSB or any other government department,” sources in the SIC said.
“After thorough investigation and evidence collected so far, Basar had acted in connivance with the officials of the APSSB to indulge in such malpractices,” SIC SP M Harsha Vardhan informed in a press communiqué.
“All efforts are being made to unearth the conspiracy and action as per law will be taken at the earliest,” the SP added.

A non-bailable warrant has been issued against APSSB Undersecretary Kapter Ringu, who is evading the SIC team and has not joined the investigation.
Sources in the SIC said: “Ringu had allegedly taken money from the broker and has been absconding since Tuesday morning.”
This reporter visited Ringu’s house to seek a statement, but she was not present there at the time. However, this daily managed to get the photograph of the non-bailable arrest warrant pasted on a pillar in the premises of Ringu’s house.
Notably, Ringu had been selected to receive the state gold medal; the announcement had been made on Republic Day this year. Sources in the government informed that the authorities have initiated steps to withdraw her medal.
On the allegation that a candidate in Namsai paid Rs 7 lakhs as bribe for the post of LDC, SIC sources informed that the matter is also under investigation.

Reportedly, several candidates who had appeared for
the Arunachal Pradesh Public Service Combined Competitive Examinations 2017-18 have also been shortlisted for the APSSB skill test.
Some of them said they are prepared to surrender their APSSB candidature and not appear for the skill test, in solidarity with the aggrieved APSSB candidates, “if the picture that surfaced on social media is found to be genuine.”
Demanding fresh examination and stringent punishment for the erring officials in the APSSB, the candidates said, “We support the demands placed by the aggrieved APSSB candidates. Fair and transparent conduct of all examinations in the state is the need of the hour.”

Guilty will be in the dragnet of law: CM

Meanwhile, Chief Minister Pema Khandu said “Within a day of investigation, the SIC has got several leads, and I assure the people that soon the guilty will be in the dragnet of law”.
Speaking at a function here, Khandu said, “Those involved in the APSSB fiasco will not be spared and the guilty will be punished as per the relevant law.”
“For the last three years I have been repeating… that corruption in any form will not be tolerated and those found guilty, irrespective of power and position, will not be spared. I am surprised that despite repeated warnings people still have the courage to do corruption.”
The APSSB came under public criticism after an optical mark recognition (OMR) sheet went viral on social media soon after the results of the examination for lower divisional clerk, junior secretariat assistant and other posts were published on its website on 14 February.
Several candidates who had appeared for the examination took out a protest march here on Monday, demanding immediate suspension of the APSSB chairman, its secretary-cum-controller of examination, and its undersecretary.

Following these developments, the state government has replaced the entire top brass of the APSSB.
Chief Secretary Naresh Kumar will be the new boss of the board and hold the charge of the APSSB chairman. He replaces AC Verma.
Cooperation Secretary Onit Panyang will replace GS Meena as member, while Education Special Secretary Santosh Kumar Rai has been posted as secretary in place of SK Jain.
Joint Secretary to Governor, Mamta Riba, will be the joint secretary, replacing Tamune Miso, and Home Undersecretary Habung Lampung will be replacing Kapter Ringu as the APSSB’s new undersecretary.

‘I am a different Mongam Basar’

Mongam Basar, a government employee, has come forward, clarifying that she is not the Mongam Basar who has been arrested by the SIC.
After being inundated with calls and messages asking if she was the broker Mongam Basar arrested by the SIC, Basar, who is currently working as a block mission manager in the Arunachal State Rural Livelihoods Mission in Basar, Leparada, issued a clarification stating that she is not the same person.
“I am daughter of Ribbom Taso Basar and Tomo Basar from Nyigam village (Meker), Basar, Leparada district, and a person by my same name has been arrested for malpractice,” she said.
“I am issuing this statement to let everybody know that this is another person. We have common names in the Galo community; therefore I request the officials publishing such notifications in future to kindly add the names of parents and native place to avoid such confusion and harassment to people with similar names,” Basar said.