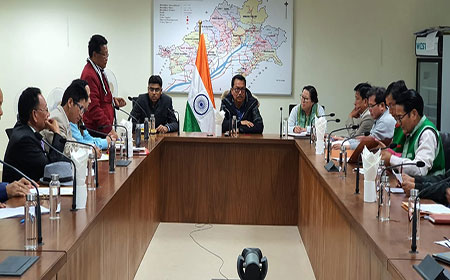 ITANAGAR, Feb 19: Deputy Chief Minister Chowna Mein held another pre-budget consultative meeting with the community based organizations (CBOs) of the state in his secretariat office here on Wednesday.
Appreciating the proposals and suggestions submitted by Arunachal Indigenous Tribes Forum (AITF) and representatives of several other CBOs, Mein said that “the interests of all the indigenous communities will be looked into and adequate welfare measures will be taken by the government to protect, preserve and promote the rich cultural heritage and the indigenous dialects of the state.”
He sought continued support of the CBOs in successful implementation of the government programmes and policies. He further said to incorporate their proposals, whatever feasible, in the state budget 2020-21.
Underlying the importance and role of the CBOs in various aspects of the tribal society, he urged them to collectively fight the drug menace.
He appreciated the way some CBOs, like the Nyishi Elite Society (NES) have adopted some government schools and informed that efforts are on by the government to revamp the education sectors.
Representatives of various CBOs, namely AITF, NES, Adi Baane Kebang, Galo Welfare Society, Tanw Supun-Dukun, Tai-Khamti Singpho Council, Singpho Development Society, Sajolang Elite Society, Itanagar Buddhist Cultural Society, Theravada Buddhist Society, All Puroik Welfare Society and Yobin Welfare Society participated in the meeting.
They thanked the state government for inviting the CBOs in the pre-budget discussion and expressed hope that such steps will pave the way for a prosperous and progressive state.
In an aspiration to make each and every citizen a part of a benchmark progressive state, the state government has made the budget preparation a participatory one for the last four years. (DCM media cell)