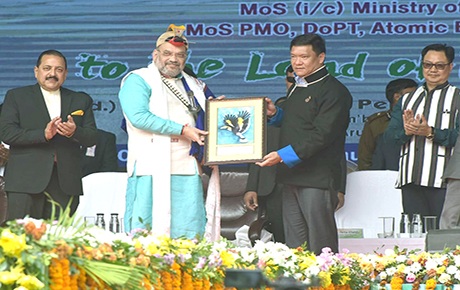 ITANAGAR, Feb 21: Union Home Minister Amit Shah on Thursday dismissed as “misinformation” the talk of repeal of Article 371 of the constitution, as he reaffirmed the government’s commitment to protecting the unique culture of the Northeast.
Addressing the 34th Statehood Day celebration here, Shah said, “Misinformation was spread after abrogation of Article 370, which gave special status to Jammu & Kashmir that Article 371 will also be scrapped. It will never happen. Nobody has any such intention.”
Most states that have special provisions under Article 371 are in the Northeast. These provisions are aimed at preserving their cultural heritage and customary laws.
Referring to the problems of militancy and interstate boundary disputes in the region, the home minister said the Modi government is committed to their resolution.
“The government has already started negotiations with various militant organizations to restore peace in the region,” he said.
Underlining the PM’s commitment to the development of the Northeast, Shah said Narendra Modi visited the region 30 times in five year – six times a year.
The union home minister claimed that only Rs 47,000 crore was spent on road construction in Arunachal in 25 years, while Rs 50,000 crore was expended in the last five years alone.
“The NDA government has taken up the ambitious project of building the 2,000 km Arunachal Frontier Highway, besides undertaking survey of three new railway lines. The government has also proposed to set up an IIT at an estimated cost of Rs 400 crore,” he said.
Shah, who also unveiled the Arunachal Pradesh Industrial & Investment Policy at the function, said the initiative would give added impetus to the prime minister’s goal of turning India into a 5 trillion dollar economy.
According to government sources, the policy will also incentivize outside investors.
The union minister also inaugurated with remote control the Joram-Koloriang road of the BRO (0-20 km), a 256 slice CT scanner in the TRIHMS, the interstate truck terminus near the ISBT, the newly constructed MLA apartments, and a housing project for senior officers.
He also laid the foundation stone of the state police headquarters building and flagged off 148 sanitation vehicles for the urban areas of the state.

Chief Minister Pema Khandu pleaded with Shah to work out modalities for creation of a separate Indian Administrative Service cadre for the state to ensure its speedy development.
At present, civil service officers working in the state are from the AGMUT cadre – a common cadre for Arunachal, Goa, Mizoram and union territories.
Addressing the Statehood Day programme in the presence of Shah, Khandu pointed out that despite 33 years of statehood, Arunachal is deprived of having its own cadre of civil services officers.
“We want a dedicated team of administrative officers. It will help the state realize Prime Minister Narendra Modi’s dream of a new India,” Khandu said.
The chief minister said posting of non-permanent IAS and IPS officers at the higher bureaucracy level in the state causes “institutional memory loss that slows down the pace of development.”
“The state government has time and again placed demands before the Centre for creating a separate cadre of IAS and IPS officers for Arunachal Pradesh,” Khandu said.
Later, Governor BD Mishra, who presided over the function, gave away the state awards, the Chief Minister’s Award for Excellence in Public Administration, 2019, and the Chief Minister’s Award for Cleanest village, 2020. The governor also inaugurated the exhibition stalls, an art exhibition and a flower show to mark the occasion.
He felicitated the members of the cultural troupe from Uttar Pradesh who participated in the Statehood Day celebration under the ‘Ek Bharat Shrestha Bharat’ programme.
Union MoS for DoNER, Jitendra Singh and MoS for Sports Kiren Rijiju were among those present.
Cultural programmes, Miss Arunachal pageant and other attractive cultural programmes marked the celebration. (PTI)