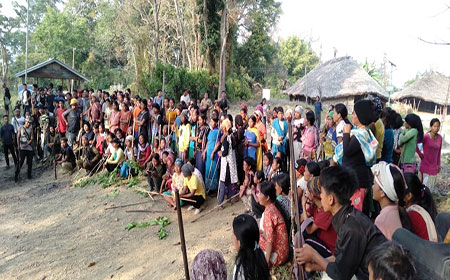 LONGDING, Feb 22: Villagers destroyed opium sprouts in 50 different fields during a ‘mass evacuation drive of poppy plantation fields’ in Kamhua Noknu village in Longding district on 21 February, under the joint initiative of the Kamhua Noknu Youth Association and the K Noknu Women Welfare Society (KWWS).
Exhorting the villagers to fight the drug menace, youth leader Tonwang Wangham said, “The Wanchos have to abandon opium addiction. It not only annihilates the life of the addict but also ruins their families.”
KWWS president Nifut Losu highlighted how the opium business in the Wancho region “is equivalent to welcoming the dark ages,” and said the initiative to destroy the poppy fields would set an example for neighbouring villages that are affected by “the opium peril.”
Longding DSP B Tangzang and PS OC O Lego, who arrived at the spot, lauded the voluntary, large-scale participation of the villagers in the drive.