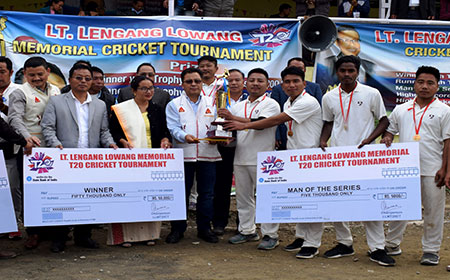 KHONSA, Feb 23: Deomali Cricket Club (DCC) lifted the Lengang Lowang Memorial T20 trophy, beating Fozo Sporting Club (FSC) by 41 runs in the final played at Nehru Stadium here in Tirap district on Sunday.
After being asked to bat first, Deomali set FSC a 235-run target to win after they finished their innings with the loss of six wickets.
FSC fought bravely but could not hold nerve while chasing the target, and were bundled out for 193/10 runs in 19.5 overs.
Lawrence Hondik of DCC, who scored 74 runs off 47 balls, was adjudged man of the match, while teammate Bikash Guwala was adjudged man of the series for his outstanding performance.
Guwala also became the highest wicket-taker (12). The award for the highest run scorer (213) went to Nyepong Tekwa of Dadam Tigers.
Wangcha Rajkumar Government College Cricket Club was adjudged the ‘disciplined team’.
Tirap DC PN Thungon gave away the winners’ trophy to DCC along with cash prize of Rs 50,000, while SP Kardak Riba presented the runners-up trophy to FSC with cash prize of Rs 20,000.
All the individual achievers and the disciplined team were also awarded cash prizes with trophies.
The prizes were given away by Chagen Gosak Lowang, wife of late Lengang Lowang, and Lapnan village chief Gango Lowang. The medals to the players of the two finalists were presented by Chagen Gosak Lowang, mother of late Lengang Lowang.
A record 42 teams from different parts of Tirap district participated in the tournament. (DIPRO)