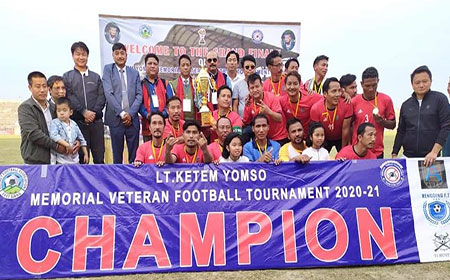 PASIGHAT, Feb 23: Arunachal United Football Club (AUFC) won the Ketem Yomso Memorial Veteran Football Tournament-2020 after defeating Eleven Wonders Football Club (EWFC) 3-2 in a nail-biting final played here in East Siang district on Saturday.
The match, which saw fortunes fluctuating from one side to the other till the end, started on a promising note.
Olik Takuk put EWFC ahead in the first half, only to be equalized by Kipa Karu within that half.
The score remained 1-1 at the end of the halftime.
AUFC’s Taja Bonung gave a vital lead in the second half, but the lead was short-lived as Maglek Taki restored the parity immediately.
Both teams were tied 2-2 at the end of the regulation time.
An extra-time goal by Olom Darin sealed the victory for AUFC.
Matuni Padung of Pasighat Veteran Football Club became the highest scorer with five goals in his kitty, while Lenzing Taggu of EWFC and Naku Padung of Ledum Football Team were adjudged the best goalkeeper and the best player of the tournament, respectively.
The award for the ‘discipline team’ went to Pasighat Veteran Football Club.
The winners and the runners-up teams were awarded cash prize of Rs 40,000 and Rs 20,000, respectively, along with trophies, certificates and medals.
Cash prize of Rs 5,000 was awarded to the ‘disciplined team’.
The final match was witnessed by, among others, MLA Kaling Moyong, PWD Chief Engineer (C/Z B) Markar Bam, and Bogong Banggo Yameng Kebang president Tagon Tasung.
The organizing committee also felicitated players of yesteryears who had represented the state in national level competitions for their contributions towards development of sports, particularly football, in the district and the state, as well.
The tournament was organized by the Mongol Yomso Foundation (MYF), in association with the East Siang District Football Association. (DIPRO)