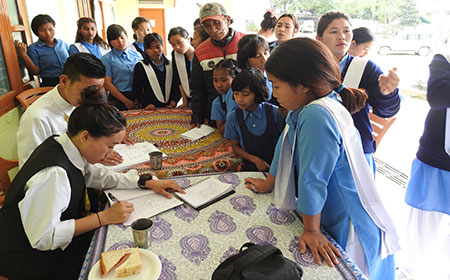 State yet to achieve excellence in healthcare: Taki

ITANAGAR, Feb 25: Underscoring the “supreme importance that health has in the growth of every nation,” Agriculture Minister Tage Taki lamented that health services in Arunachal are “yet to achieve excellence, even in urban areas.”
Speaking at the inaugural function of a two-day ‘diagnostic and hearing aid fitment’ camp which started at the Don Bosco Youth Centre (DBYC) here on Tuesday, the minister while congratulating the Association of Past Pupils of Don Bosco (APPDB) and the DBYC for organizing the camp, which is being conducted by Mumbai-based Ali Yavan Jung National Institute for the Hearing Handicapped (AYJNIHH), urged the organizers to “come up with more such programmes even at the district level, which will further benefit the rural public.”
AYJNIHH HoD, Dr RP Sharma, spoke of the institute’s commitment towards improving the lives of persons with hearing impediments. He expressed happiness over coming to Arunachal after a gap of 25 years. The first such camp had been held here that many years ago.
DBYC director, Fr CC Jose, praised the doctors and experts from the AYJNIHH for making the camp possible in Itanagar, and IPS officer Kime Aya, representing the APPDB, thanked the expert team from Mumbai for collaborating with the APPDB “and providing such a great humanitarian service for the people of Arunachal.”
Six doctors and experts from the AYJNIHH will provide counselling and hearing aids, as per necessity, during the two-day camp.
Children from the Donyi Polo Mission for Visual and Hearing Impairment presented an opening song. The hearing impaired children will also receive hearing aids.