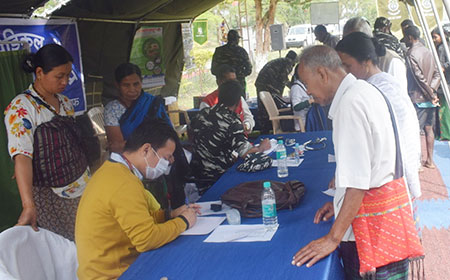 GIDDING, Feb 27: Over 300 patients from Gidding and nearby areas benefitted from a free medical camp organized here in Changlang district by Namsai-based 186 Bn CRPF on Wednesday under its civic action programme.
The battalion’s Medical Officers, Drs Sohag Biswas and Borish Konsam, along with civilian doctor Omi Changani and medical staff conducted the camp, and provided medicines to the patients free of cost.
“Apart from securing the area from the evil designs of antisocial elements, the CRPF takes the responsibility of care of local populace and desires to establish connect, so that the local civilian population could approach and interact with the force without any hesitation or apprehension,” 186 CRPF Bn Second-in-Command, Kumar Vijay Shankar, who inaugurated the camp, said.