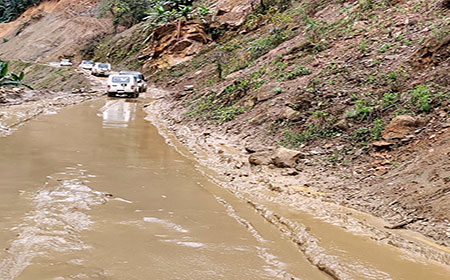 ITANAGAR, Feb 28: The slow pace of construction of the Joram-Koloriang road, popularly known as JK road, has made life miserable for the people of Kra Daadi, Kurung Kumey and Lower Subansiri districts.
The foundation stone of the road was laid in December 2018 by union Road, Transport & Highways Minister Nitin Gadkari, in the presence of Chief Minister Pema Khandu and a host of other dignitaries.
The 138 kms long road is estimated to cost approximately Rs 900 crore. The project is scheduled to be completed by February 2021, as per the agreement, but the local people say the work is progressing at a snail’s pace.
“We are facing a torrid time due to the ongoing construction work. We understand that the citizens should cooperate for our own long-term benefit, but the contractor has not deployed enough machinery to speed up the work. This is worrying us,” said Tadar Tarish, former president of the Arunachal Law Students’ Union and a native of Nyapin in Kurung Kumey.
“This is the peak work season in the state, but the contractors have not deployed enough manpower and machineries. The situation is very bad even at this time of the year when there is less rainfall. The people of Kurung Kumey and Kra Daadi in particular are going to face massive problems when the monsoon arrives,” said Tarish.
The locals have appealed to the National Highways & Infrastructure Development Corporation Ltd and the state government to look into the matter.
The JK road was in the news not long ago over excessive disbursement of compensation in Lower Subansiri district. Inquiry had been initiated into the scam, and those found guilty were arrested by the SIC.
TKE Consortium Private Ltd and Brand Eagles are the contractors for the construction of the JK road.